Yeah @Leafy271 I would do what @vegetato suggested with cleaning the roots and also what @Bplatinum9 suggested and get yourself some hydroguard asap. I had a similar problem and got some and no more issues. That for sure looks like the beginning of root rot there at the bottom cluster there 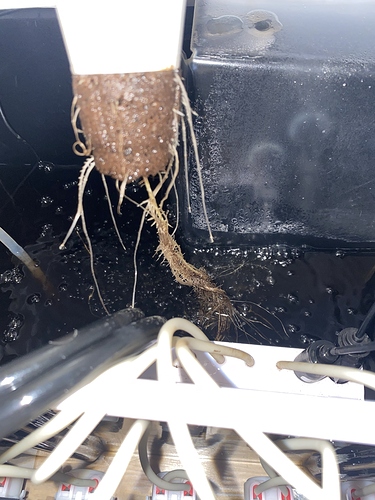 Aren’t you using recharge though?

I was wondering the same thing, have you introduced the recharge with your latest drain/fill?

Aren’t you using recharge though?

The reason this is being asked is because it leaves a similar brown residue on the roots, so it’s (probably) not a case of root rot in that case if the brown coloring coincided with the addition of recharge.

I was, but than I did a water change with just hydro guard, I felt like the plant was looking to sad with the recharge. I thought the roots might look a little clumpy?
The reason I thought my water was a little brown still was maybe a little bit of the recharge was In the reservoir. My water change is tomorrow.

If your already using hydroguard then its more than likely its the recharge that stained your roots.
Unless they smell really bad or get slimy its not root rot. 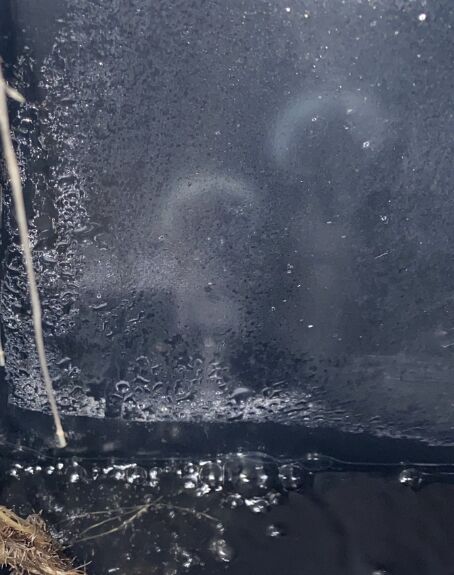 I notice in that pic that your water is below the low-fill sensor line.

You should be “topping up” by doing a “fill” from the app (without draining) mid-week if possible. At the later stages that might even be 2-3 times a week if she’s drinking a lot.

Well then I would assume that’s the reason for the stained roots, I’m sure it won’t just go away now that it’s stained. Just keep the lid down now and just watch your plant. If the plant is healthy up top then there’s no need to be lifting the lid and checking. It’s harmful to the roots and can just add to problems.

I been feeling like it needed more water too but A few days ago I tried to top it off, with out any notifications. And it wouldn’t fill, it would just stop automatically like it was full. That’s when I asked the Community if the grobo would let me know if my girl needs water. It let me know my seed needed water in germination.

You’re doing fine then - it doesn’t look super-low it’s just something not to forget to do.

At first it’ll run for a quick sec and say done, over the weeks that gets longer as she gets thirsty.

Could my water level getting low have possibly have caused the brown roots on my plant. I have not changed mine out since a week ago and when I check today it was low

How much water did you mix with the hydrogen peroxide? And how long did you let it sit ?

@Leafy271 when I did this cleanse my intent was to kill everything living on and around the roots, which can leave the roots vulnerable. Be aware that h2o2 doesn’t discriminate, it will affect/kill good bacteria along with the bad.

Also note that mixing h2o2 with tap water has a reduced effect, it reacts with chlorine which leaves less available to go after the bacteria. I was using tap water, if distilled/RO water is used then less h2o2 can be used.

The cocopod is also a place where the rot can hide/come back, which is why I soaked it too.

If you have something like recharge to add afterward it’ll help to replace the good bacteria that were killed.

I also cleaned out the grobo reservoir as per cleaning instructions while letting the roots soak in the little container/bucket.

If doing a clean mid-grow make sure to unplug all bottles before draining/filling/cleaning the res to keep them from being added to the water/vinegar/etc. I forgot to do this once after adding the 50/50 vinegar/water and it looked like I had 200 airstones running in my res (think baking soda volcano), that’s something I’ve not repeated since.

Here’s the relevant part from the post I linked earlier: 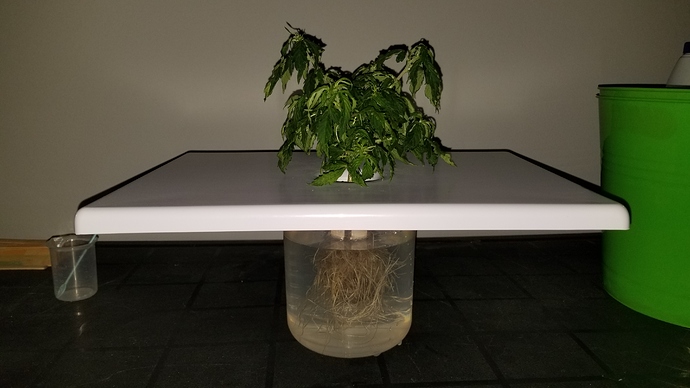 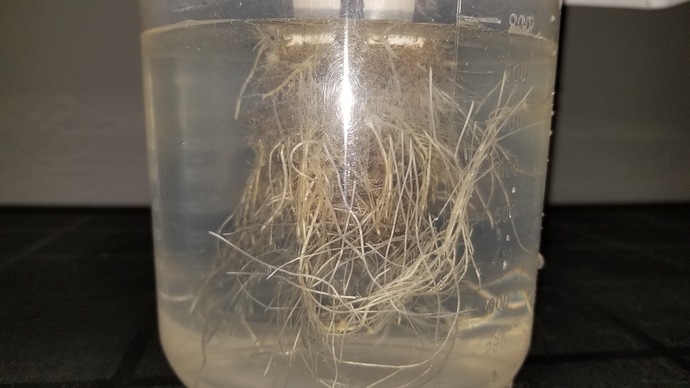 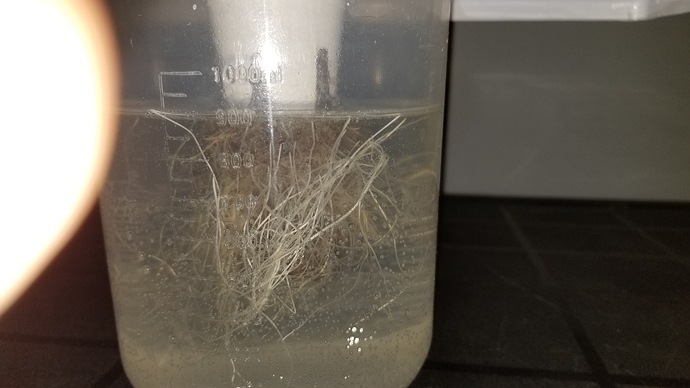 Pics of the roots a couple days later, still nothing to write home about. Those bubbles are the result of 2 added air stones powered by 2 separate pumps on top of the grobo’s default air stone, so even if a pump dies there’s still 2 air stones running - there’s definitely enough aeration: 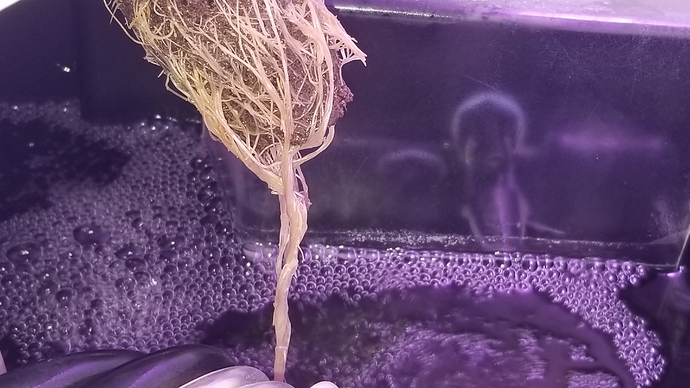 Half a week later, she’s showing signs of improvement - there is some reach occurring: 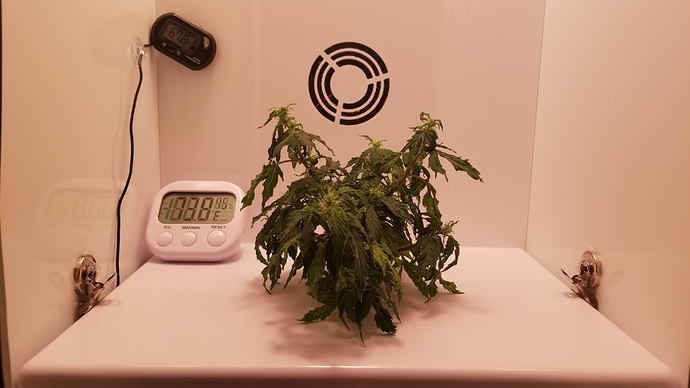 I concocted a blend of 50 mL hydroguard + 1/4 tbsp great white + 1/4 tbsp root rescue (basically hydroguard + something “recharge”-like) in 1.2L of water and put it in a separate container to bubble for about 12-14 hours. I also mixed about 2-3 drops (about 2/13th of a mL) of molasses in the container. I added half of this mixture to each reservoir and poured some of it through the coco pod (slowly/carefully) to make sure it saturated that part of the root zone as well. 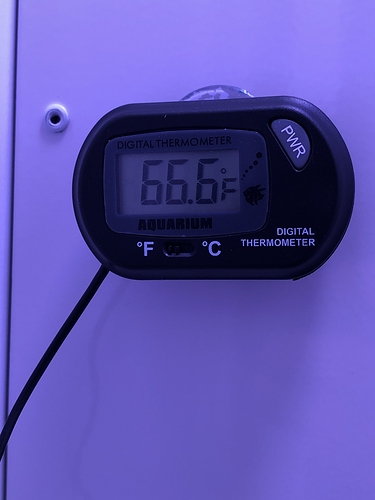 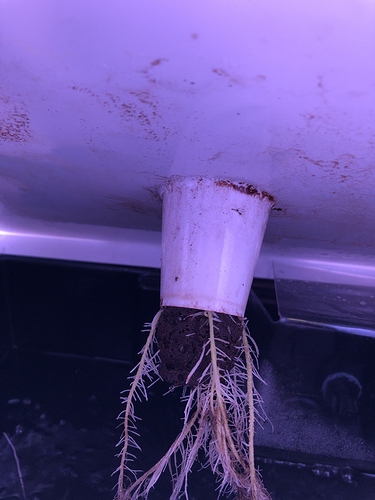 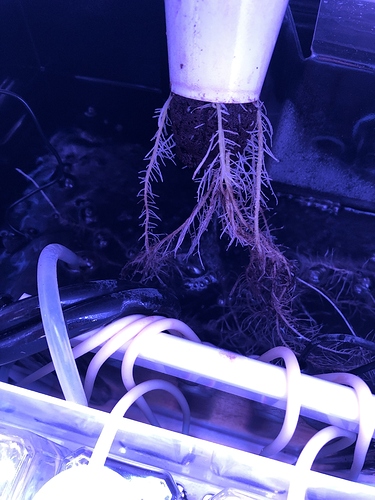 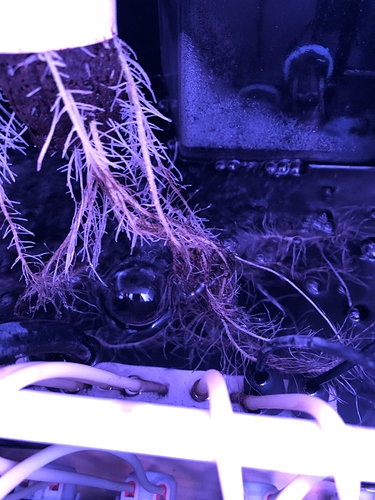 Here are some more pictures. What is the brown stuff on top of the reservoir? It appears to be the same things on the roots, I touched the roots and the stuff got on my hand.

The brown stuff with a lighter reddish or yellow tinge/color is just from nutrients.

The blackish-brown stuff is the concern. If it wipes off easily and looks red on your hand, it’s just nutrients. If it only somewhat wipes off and feels like slime on your hand then that’s a harmful bacteria that suffocates the roots.

I’m still not entirely convinced it’s rot, or perhaps it’s only maintaining a partial foothold on the root zone due to the lower temps?

I’m not sure. The roots do not feel slimy or really smell bad, the water just has a mildew scent

How is the base of the plant itself looking? Have any pics of the top area of the cocopod and base of the stem?

If you’ve been keeping RH up that could be how she’s putting up such a fight if that is rot setting in.

The leaves look super-healthy up top but something is up as you’re already nearing flower stage in the recipe. This doesn’t look like a simple case to diagnose but thankfully she’s not curly and brown up there - “doing nothing” and observing what happens next might be the best course of action. If anything maybe just clean off the roots below the cocopod a bit to see how fast it returns (or doesn’t).

Yeah looking at the other pictures posted I’m not entirely convinced it’s rot either, I think it’s just the stain. You’re right @vegetato plant looks really healthy up top, and with the water temperature at 66.6