So my grobo plant that’s only on grobo nutes no supplements is sucking down ph down like water. Just added new bottle at the beginning of grow now its empty. Could heat be doing this. Why is the ph so off…

How does temperature affect PH

Could heat be doing this

Nope, defiantly an issue your bottles 1 & 2 should easily last two complete grows. My best guess is a calibration required. Easy step by step process in maintenance but you’ll need 4.0 and 7.0 buffers to do it.

U got equipment to adjust before drain and fill? That’s what I did at first. Now I am not and it looks like it has used quite a bit more.

I calibrated before I started this grow.

I’ll try that. I’m gonna have to feed her and keep record all my bottles are empty. I’m not spend another 80 bux on nuts from grobo

Has anyone tried General Hydroponics pH Down? It’s $15 for 32oz vs Grobo’s $40 for 32oz ($10 each 8oz bottle) which is a huge difference. I understand that the Grobo is optimized for its own nutrients, but wouldn’t the formulas for pH down & pH up be pretty much the same across hydroponic serving brands?

I tried Advanced nutrients ph and down. They didnt fare too well in the thin grobo bottles. The bottles thinned out and melted

Maybe grobo’s pH down is weaker? I couldn’t find much info comparing the differences between the many brands out there, but this video mentioned General Hydroponics being a ph point weaker than Advanced Nutrients. 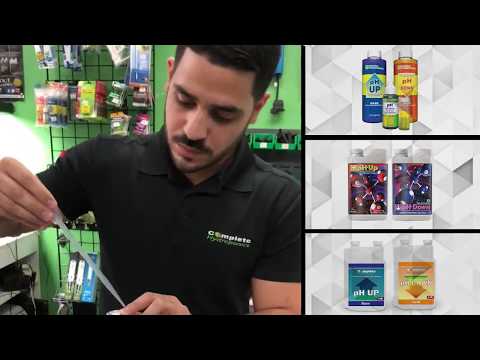 Ahh, so that’s how that bottle melted. Saw your post about that in the past and had been wondering what caused it. Makes sense now.

It’s more about the differences in chemical composition. Never reuse a bottle for something unless you know the ingredients of both and the potential for reaction that can occur between said ingredients. The nutrients are less of a concern than the acids/bases used in pH changing solutions but it’s still chemistry.

I’d suspect it’s also possible the bottles were reversed and filled with the opposite (ph up in what was originally the ph down bottle) to cause the reaction but that’s just a guess.

Even simply using additives in the grobo can cause similar issues if that’s not considered. It’s not recommended to diverge from the grobo-supplied nutrients or reuse those bottles for anything else, as these can be expensive lessons to learn. Imagine if parts in the reservoir had melted instead of just the bottles, that’d be a bad day.

I think I might try using the product I posted in its own bottle. I definitely understand why we shouldn’t add anything to the grobo bottles, but there’s no way another brand of ph down is going to have a reaction with the reservoir container and cause it to melt, especially considering it is filled with water.

If the res isn’t empty and still contains any of the original pH up/down that’s where the potential for reaction would come. When the res is drained it’s not completely emptied so there is still some left behind. But ideally that’d be diluted from so much water and not cause issues.

Plastic is also porous so just as the containers had a reaction I wouldn’t be surprised if the tubing or even the reservoir had some reaction even if only slight. The tubes and pumps would be the real concern (which are part of the reservoir mechanics).

Yeah, I’ll do my best with cleaning everything before adding the new pH down to a new fill. Hopefully it works out

@Hellyesshedid,
Honestly the grobo nutes already have ph down in it so I would just submit a ticket to get the ph balanced and if you have already done that the rest will be up to the plant. Once you adjust your PH manually you may have to keep doing so, while in the grobo its not really necessary when it already comes with that function, its why the grobo has sensors and probes.

There’s nothing wrong with the pH as of now, just running low on pH down. I’m going to switch to General Hydroponics pH down once the Grobo bottle is used up - not by manually feeding, but by placing the grobo tubes in the new bottle.

Got it! Did you put in a order to replace the bottle or were you trying to permanently replace it?
Keep a close eye on your baby and submit a ticket at the fIrst sign of any damage! Keep us posted!

P.s. Probably would have been better to manually feed not sure if this product would get dispensed right with Grobo sensors, its not formulated for.

If all works out, this will be a permanent replacement at least until Grobo offers 32oz supply. I’ll be watching her closely and if there’s any discrepancy I’ll put in a ticket to have the Grobo adjusted accordingly (effectively calibrating the Grobo for the new pH down). I will keep you guys posted!