So, during the past week I’ve been notified to add water, that was cool, something to do.

Grobo dispensed nutrients 1&2 at that time.

No growth yet, no little white roots trying to poke out of the bottom of my pod. The top of the pod is still moist, the bottom is swollen where it’s in the water absorbing.

Went ahead with weekly drain/fill this morning instead of last night. Wasn’t really sure what to do with no life yet. Grobo then dispensed nutes 3, 4, and 5. A little early for that from what I’ve read, isn’t it?

So. I was a bad girl. I did what I’ve been dying to do and gently poked around in the top of the pod. SOMETHING’S HAPPENING!! Hopefully I didn’t screw it up. I DID just wash my hands before the drain/fill and was poking around right after that. So I found a little white stem in there pretty close to sprouting! I think the seed might’ve gotten buried too deep because the little sprout inside the pod looks like a good 1/2" to 1" if I had to guess. Idk, I covered it back up right quick!!! I was very excited to see something but at the same time scared that I might be messing it up. I didn’t take a picture of that, it all happened so fast.

So… what I’m wondering is if I should extend germination? Go back a week? If she pops in the next 2 days just leave her alone? 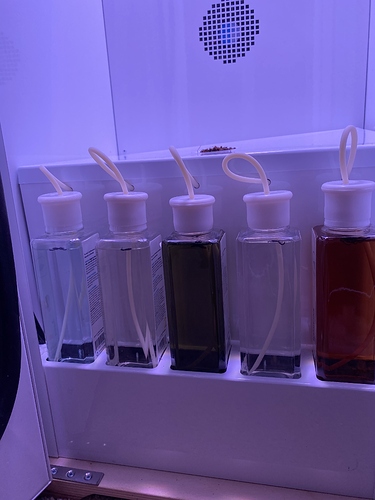 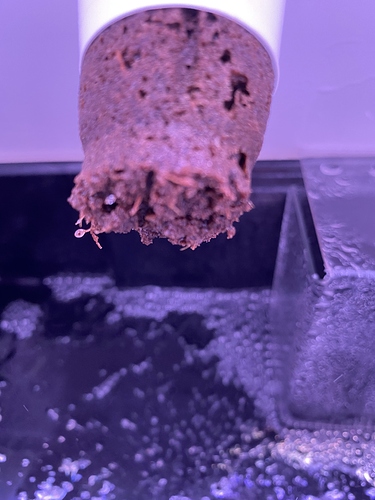 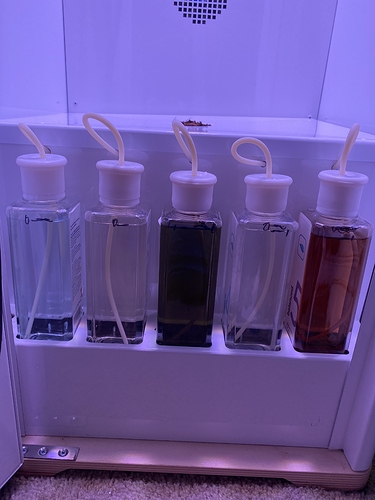 Never need to extend any stages except late vegetation and flower typically.
Seeds csn take 14 days to pop. 1 and 2 are ph control so the water your using isnt ph neutral

I hope someone else can chime in and help out on this one, as far as I’ve learned so far it’s too early to give nutrients to the baby seedling especially since you haven’t seen anything up top yet.

Don’t worry about checking the pod, I did the same thing and actually grabbed my seed with tweezers cuz I thought it wasn’t doing anything. then I saw the white root on the underside… and was like “WOOPS SORRY MY FAULT!” and put it back O_O

Just brainstorming, but would skipping the notification to drain/fill and doing it thru maintenance cause those bottles to dispense?

Naw, that’s the way you have to do it… When you get the notification it just prompts you and then directs you to the Drain page I believe (so it’s basically just the same thing)

I just did a drain and fill an hour ago, and I went to Maintenance and Drain myself. My #3, #4, and #5 did dispense though because it’s my 4th drain and fill of course.

I wanna say you’ll be okay though to fix this once someone more experienced can help out, I think one benefit in your favor if this is actually a mistake (which I believe it is somehow) is that you don’t have roots sucking the water yet, only bubbles keeping the coco wet, so I can only imagine the nutrient uptake won’t be a factor yet? I could be wrong, we’ll find out here…

Notifications are an annoyance and mean nothing. They are not actually connected to any function. I get sn email daily my machines need water. Just ignore them. Even when turned off youll get them lol.

She needs to know about the Bottles #3, and #4 dispensed at first drain and fill… got any input?

Open a ticket for them to double check i dont think its supposed to that early.

will do, thank you! @Dani

your good in the meantime though, if she doesnt pop in a few days, you might need a new seed

Here is part of tonight’s notification from @Stephen, which again makes me rethink whether I will need to change my schedule early so that the fans come on at the right time and that the water fills to the right levels when it should so I can avoid damping off, doesn’t that make sense? Idk, I tend to get into trouble using my own noggin but that just seems logical to me, I’m not trying to rebuff champion advice by any means!! But I would love some more input!
Week 2
During this time you should see your seed sprout. If by the end of this week the seedling has not emerged, it’s time to investigate and possibly restart. When a seed is successfully planted, it will split in two as its sprout emerges from the husk. The tail grows downwards, plummeting deeper into the soil until it has enough leverage to sprout above ground as well. The husk that has the two halves of the seeds will emerge from the ground and absorb solar energy to produce chlorophyll. The rest of your plant’s growth continues from there.
*(pretty sure I saw the tail then, and guessing it pops tomorrow or Thursday

, hope I didn’t knock seed off)

You should see some green by now!

One of the things you may notice is that both of your round intake fans in the back are off. This will change this week. You will notice that the bottom fan will start on day 10 and both will be running by day 24. In order for a seedling to thrive, it needs a consistent and stable environment. This includes a consistent temperature, humidity and airflow.

Your seedling is fragile and you can help it thrive!

Your cannabis seeds have popped and will start sprouting into a little seedling! However, your seedling is very susceptible right now to a serious problem that many other plants face in their early stages called damping-off. This is a serious condition that causes the rotting of your plant stem and root tissues at and below the surface of the CoCo Pod which can kill your seeds, seedlings, and clones.

There are many precursors for damping-off such as high humidity levels, planting your seed too deep, and poor soil drainage. However, the main culprit for damping-off is overwatered and poorly aerated growing mediums. That is why during the second week of growth, the Grobo only fills to the Low Fill line in order to fight against damping off while still providing your cannabis moisture and nutrients by aerating the water.

Okay here is the answer about the 3,4,5 bottles from Danielle. I know I’ve seen this question floated many times and maybe the answer is out there and I haven’t seen it. I always see people saying that it’s too early for these bottles, but not necessarily the case. Thank you @Dani!

Is it too early for 3, 4, and 5 nutes to be dispensed?
Nope, the dispensing of nutrients at this time is completely normal. It dispenses a small amount of bottles 3, 4, and 5 to prime the tubing, ensure the pH and EC probes can register nutrients, and - if at this time your plant has a tap root poking out - expedite its growth so your plant is set up for success a bit quicker. This has been confirmed by our Hardware department, so, nothing to fret about there.

the bottom is swollen where it’s in the water absorbing 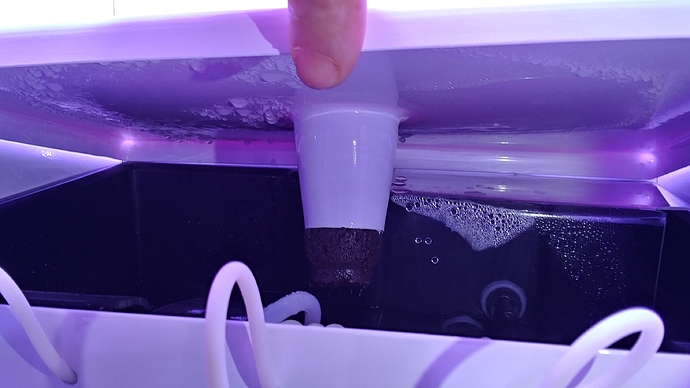 If you haven’t already, push your pod up a bit to avoid damping off. { 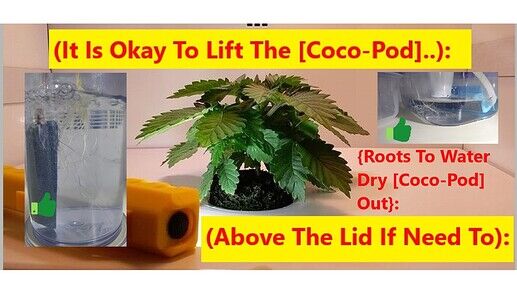 Thanks @SilverGrobo I figured that one out!

I’m learning so much!

You guys are so awesome!

So I finally got a hygrometer and discovered it’s a little warm and a lot dry inside my Grobo. About 83 F, I guess that’s okay, right? But 34% RH. I should probably try to bring that up, shouldn’t I? I don’t have a humidifier or any of that good stuff yet. I put a glass of water in there earlier today and it hasn’t gone up. I just put 2 more glasses of water in there. Any other ideas for raising the humidity in there?

I am in the process of getting a humidifier myself but in the meantime I have been putting some wet paper towels in there and it has been helping with the humidity. Hope this helps.

How wet do you make your paper towels? And thanks for the tip!