Stress is probably the #1 factor in most cases.

I believe that it’s tough to call out the genetics unless it easily “hermies” or just won’t pop in any condition or is unstable with too much variance or different phenotypes. Plus, that’s only possible to know with enough experience and when growing at a larger scale – doing a plant at a time in a single environment (as we do) doesn’t really give a good enough sample size for that.

The best we can do is see what works for others and try to reproduce the quality/yield/etc given their examples, with a bit of experimentation and personallization for our own environments.

Right, she’s usually in great humidity & temps and when my humidifiers go out or the temps get a little high, it’s never more than a half hr before I realize and adjust accordingly so it’s weird. I’m growing the same strain next grow so I’ll find out in time.

I notice you’ve got a bud site with hairs

Just transplanted from soil to my grobo (experiment)

I think I’m ten days out till transition

Just transplanted from soil to my grobo (experiment)

my first grow ever

I literally unplugged it from the wall to accomplish this (remember I have 2 air stones still running in this case).

(You need a second [airpump+airstone] to keep your plant from starving for Oxygen):

No! She is going to make the most glorious miraculous 180 EVERRR

Just as I did with my last grow, let her sit in complete darkness for 2½ days before chopping down. Around the 48 hr mark the smell changed from being sharp to sweet which is the same as the prior time I tried this.

Trimmed and hung to dry using the drying mode: 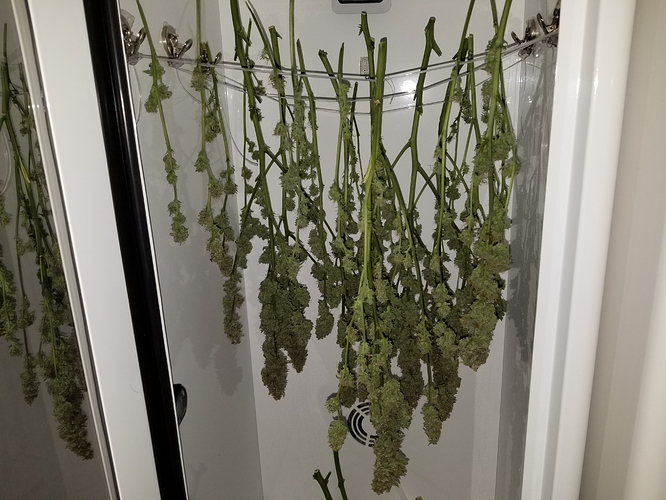 Really excited for this one. It’s not as bulky as the last grow but can catch a buzz just being too close to it.

Can you explain the why of your concept to me sounds interesting? Have you ever encountered mold issues doing this?

Just as I did with my last grow, let her sit in complete darkness for 2½ days before chopping down. Around the 48 hr mark the smell changed from being sharp to sweet which is the same as the prior time I tried this.

@Bplatinum9 I did notice the humidity was around 60% when I opened the grobo after the 2 days but that was mostly because the fans weren’t running - I literally unplugged it from the wall to accomplish this (remember I have 2 air stones still running in this case).

It would’ve been much better to use a darkness recipe vs unplugging it for that reason. It might’ve started to mold if it were warmer or longer.

What’s the theory behind leaving her in complete darkness for 2.5 days before chopping?

From what I gathered these are the supposed effects:

It’s a lightweight means to shock the plant one last time which either helps or does nothing (i.e. shouldn’t kill or hurt, besides potential humidity issue noticed this time; but that was due to grobo not the technique)

Something anecdotal about this, is that in the past I was told to always chop at 5am before the sun comes up (outdoor growing), for which I never was given any explanation. After researching this a bit more recently I believe that this was the reason - to catch the plant before any photosynthesis has occurred for that day.

Wow, interesting. My dwarfed plant is probably going to yield like 7 grams * cue sad trombones *, but I’m going to try this anyway. Seems like it can’t do any harm and the logic behind it makes sense.

I’m still lost, if you chop the plant down to put it in 2 day darkness how does that theory apply?

@Bplatinum9 it’s 2 days of darkness before chopping the plant.

She was still drinking from the reservoir during that period. And this is why mentioning the 2 extra airstones was relevant, she wasn’t suffocated even though I had to unplug the grobo to keep the lights out for that long.

Now were cooking with fire!

I Have heard of this!

interesting - saving this one!

I heard of this and was planning to do it during flush. On my last 3 days of it. I thought you can control the light on and off. You can’t turn the lights off?

The dry mode allows for the light to be off but complains if the reservoir is full and might not power the air pump anyways. There isn’t a mechanism for us to run the pump+fan but not the lights (currently).

@Jay_Peso: If you do this make sure you still have a water stone producing bubbles! She could wither up quickly if she’s not getting oxygen for a few days. 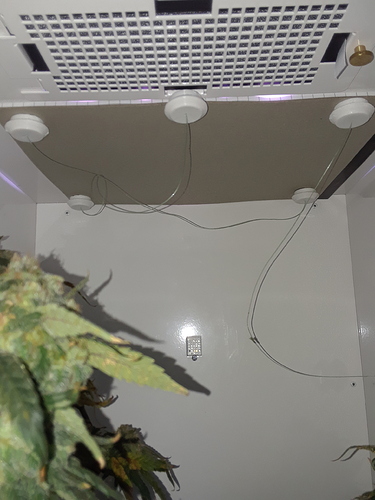 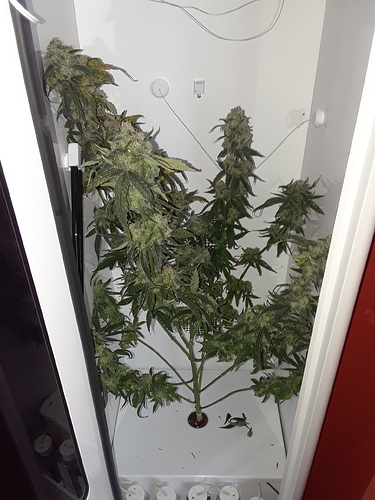