I have a couple of thoughts/questions:

@vegetato not really yellowing. But the out side of the leafs are darker green than the insides. And it’s still just the four little leaves that’s been there. It seemed like everything was good through germ phase but then once nutrients were added to the mix he doesn’t like them…

The only suggestions I can think of:

Also, any idea what your room temperatures and water temps are like? It’s good to pick up a humidistat/thermostat for inside the unit as well as an aquarium water temperature sensor/display (each is $10-20 online). If it’s colder in the room in general that can make plants grow slower too.

Mines looks the same 5/14Early Veg. It’s the fan making it to cool for her. Take the fans off her because that cause a couple of degrees cooler then the box itself. With that couple of degrees can actually be big for a stunted plant. That’s what I found out at least when my plant leaves curled under.

She is growing pretty slow to. 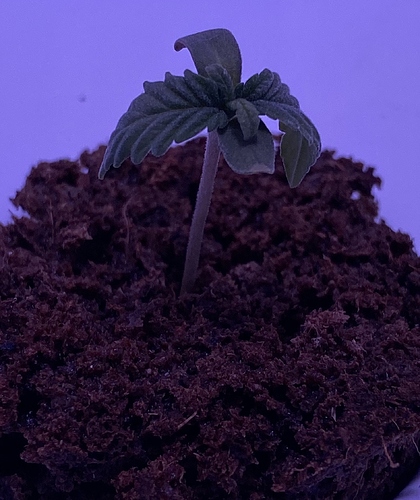 Yea I ordered a humidity/temp display for by the plant. My ph meter has a temp on it and my water stays between 69-70 degrees. And yes I moved the fans off of him. We’ll see how he looks when I get home. I may just end up turning them off till he gets bigger @vegetato
And thanks for the heads up @Mookie. I just got a notification from the Grobo app saying that my pod should start drying out now since water is being filled to the middle or whatever, and also said that if the roots need more help that I should manually add some water. I’ll be doing that as well when I get home.

I made it home and she perked back up once I removed the fans from blowing directly on her. I’m about to manually fill up my tank too a little so my other roots are able to soak up the nutrients as well. I’ll let you guys know how things turn out. Thanks again for the help @vegetato and @Mookie

She’s going to make it I think!

I know I’ve seen it in other posts. Just can’t remember where. Anyone one have any ideas about how to clean my root, or should I just leave it? It’s right by where the nutrients get dispensed and it’s brown. You can even see where the air stone has splashed it up on to the lid around the pod. @SilverGrobo @pyromancy @vegetato @SWSVIC 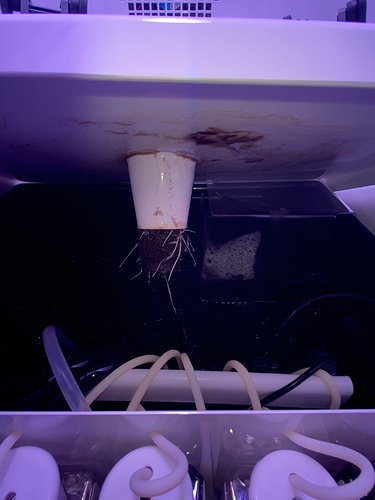 It’s right by where the nutrients get dispensed and it’s brown. You can even see where the air stone has splashed it up on to the lid around the pod.

Some of the nutrients can leave a reddish-brown residue on some things, that’s probably what that splashed stuff is.

When there is brown stuff on the roots that is bad it looks more like this: 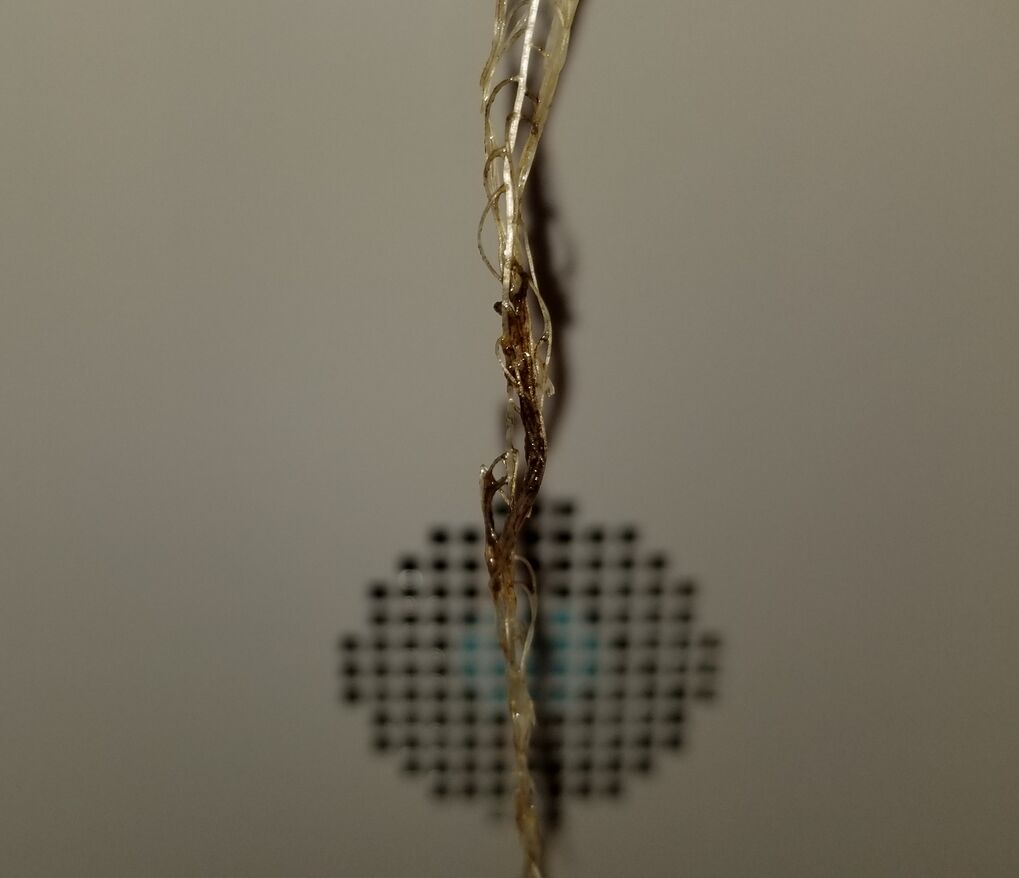 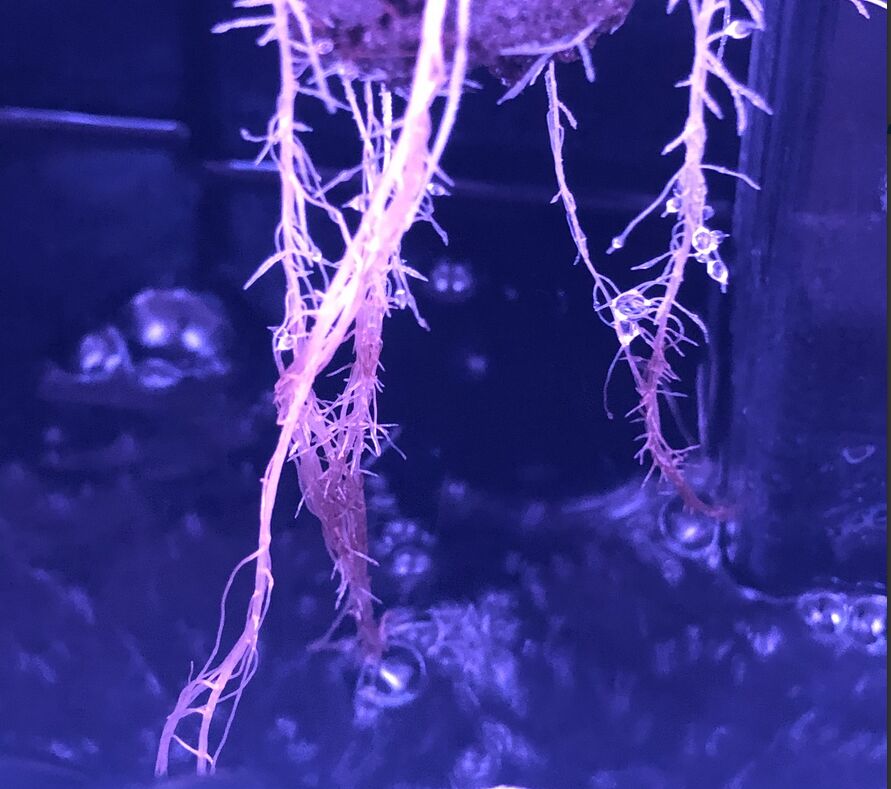 How does that long root coming out of the bottom look? That’s probably the “tap root”. It’s a bit dark in the pic and hard to tell if it’s white or not… that one should grow really long into the reservoir sooner than the others. If that’s not the case (i.e. if that particular root looks unhealthy,) perhaps you’re catching something early.

I may be in trouble then. It’s just the way the flash looked, but all of them besides the bottom of the tap root is white 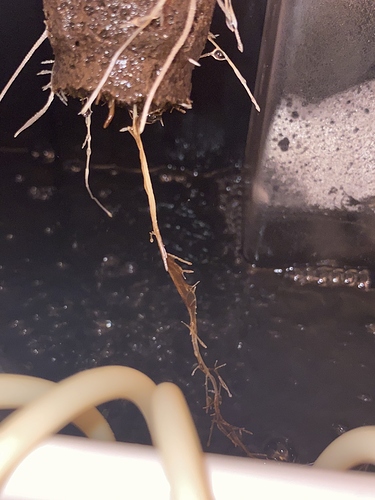 That’s caused (mainly) by the water getting too warm.

Is there anything you can do to lower temperature in the room, and to keep it lower in general? Is the grobo up against a wall or in a corner by chance? I have mine directly in the path of an A/C vent and that helped a lot.

Topping up with water from the fridge might help too. When I fill my reservoir I take 1/2 of the water from fridge and the other half is room temperature.

If something like this occurs it’s usually recommended to clean off the roots (with h2o2/hydrogen peroxide - it kills off the slime) and also clean out the reservoir with vinegar to eliminate any infection from those areas. The whole lid can be taken off and placed into a cup/pot/pail while that happens.

You’ll definitely want to pick up some hydroguard in the meantime to help mitigate the problem unless you find a way to keep the water cooler (even so, it’s good as a precaution/backup)

It’s been around this temp the whole time. And yes it’s near a wall. Probably 6 inches away. That is the highest I’ve seen the ph so far as well. Do I dip the roots in h2o2 or use a toothbrush? 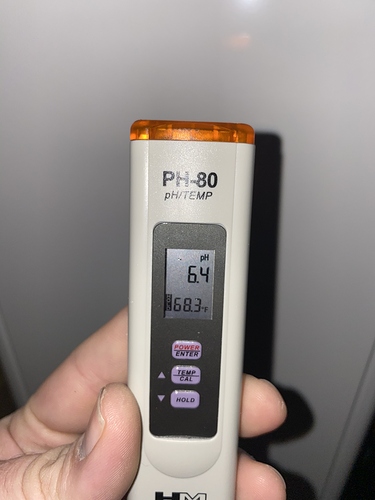 I also noticed when I was checking to see if it’s slimy (Which it’s not) it’s only in the middle. The bottom of the root is white as well. It looks like a heathy plant up top. 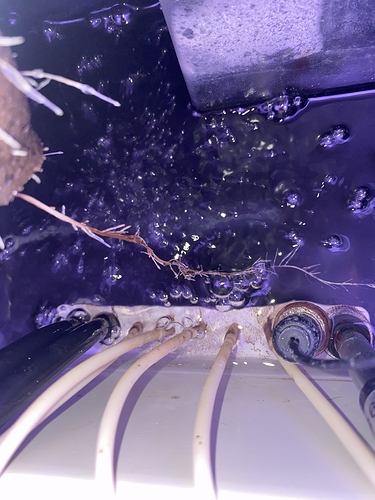 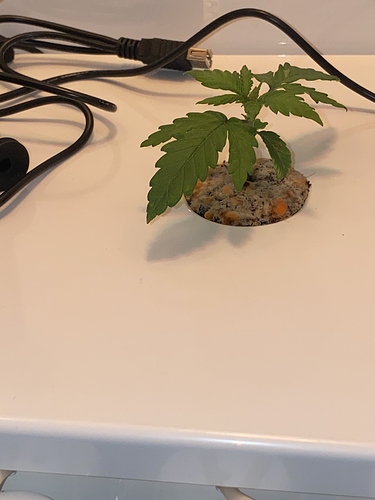 That’s great then, if the temp is usually within range then hydroguard should work just fine on its own to bridge the gap without any additional cooling required. It’s probably just hitting higher temps sometimes and that’s enough to cause the bad stuff to grow during that period – I have similar ups/downs here (usually fine but some days are just warmer).

Yes, just dip the roots in the h2o2 + water and wipe them off, and try not to wipe any of that brown stuff onto many other surfaces if you can help it (wash hands etc).

After dealing with the root rot, recleaning, and sanitizing everything it happened again. I repeated everything I did the first time and even got my water temp down even lower. It just wasn’t good enough though. My little guy is dead. Going to restart, and try again🤷🏻‍♂️ 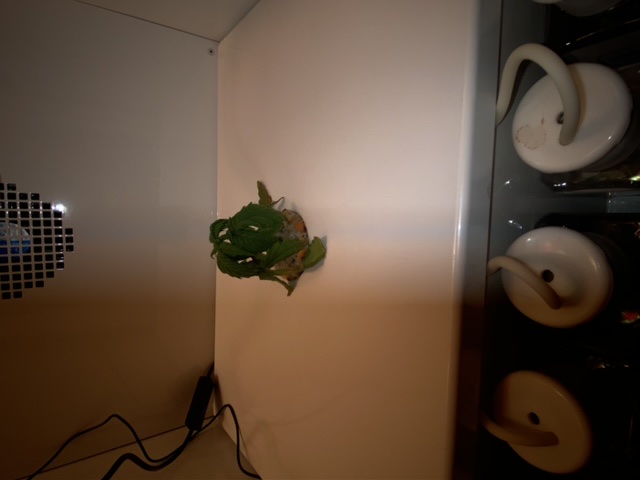 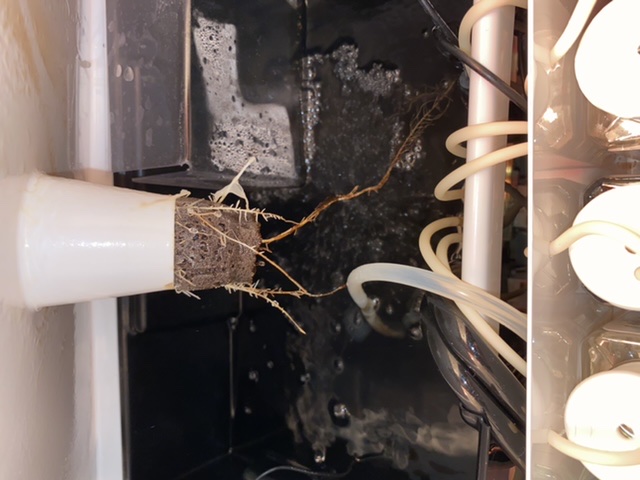 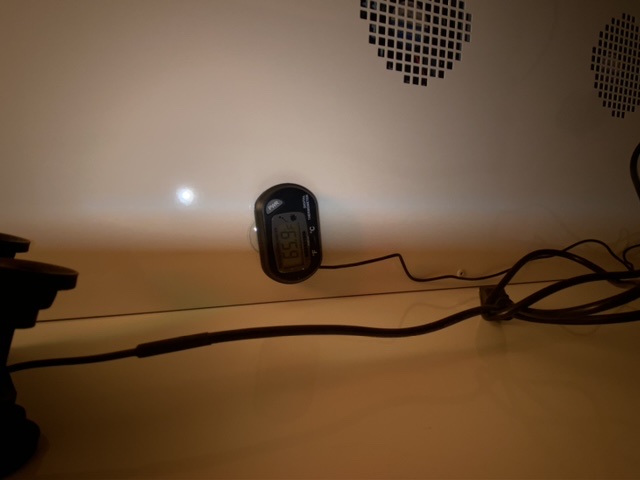 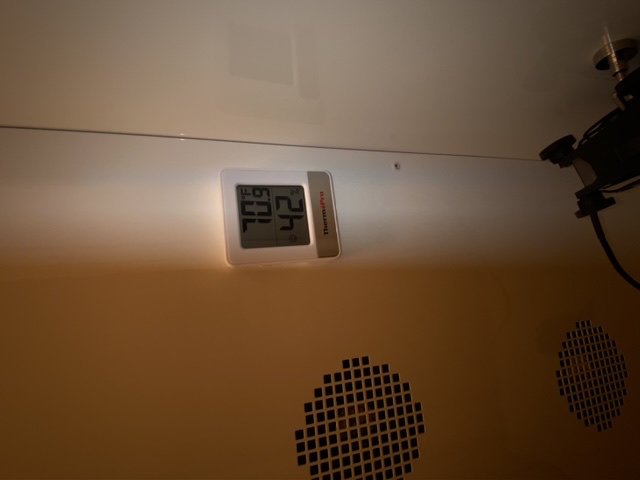 Sorry about that man! That really is sad to hear, but now you’re more equipped and ready for the next one…

I am really sorry!!

One other thing I’m noticing that is worth mentioning: 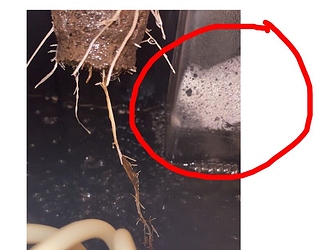 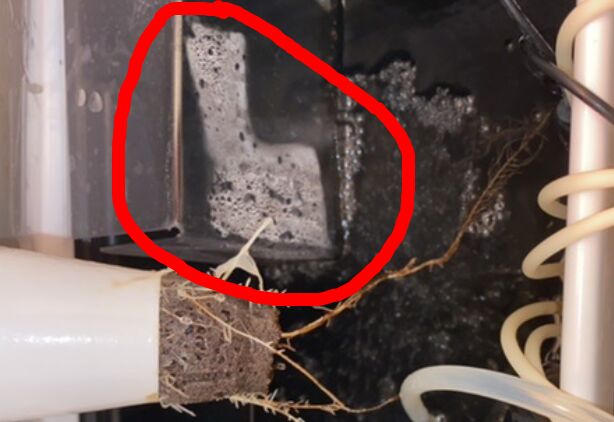 Just did some searching and reviewed a few others’ grows, including my own, and noticed that seems to be common among many of the threads that mention “root rot”.

I don’t think that to be “the cause” in general, but am thinking that’s a sign of the temperature issues we’re trying to avoid. I haven’t had that condensation/fog build up on mine when things are going well, but I did have it when things weren’t.

My suspicion is that there may be some heat generated by the air pump that is in that same corner, and having the sensor shield there might help to trap some warmer air in that corner. I’m thinking that could be where the problem is originating.

I run with the “trap door” on the rear of my units removed, with fans blowing in that direction to circulate air down below in an attempt to prevent that. I’d be curious if that makes any difference for you, at least to see if it stops that fogging from occurring.

Thanks for the insight @vegetato I’ll try that as well. I’m going to let the reservoir sit in the 50/50 mix of water and vinegar for a couple hours, and scrub every inch of the unit down in preparation for the next grow. Along with I’ll run a health check on my probe like I did at the beginning of the last grow. My next question would be is there a temp that it shouldn’t go under?

only asking because I moved my unit down into my basement. It’s away from walls and objects. So nothing should be generating heat around it, and with it being down there the unit will be cooler. I’m just wondering if I’m going to run into any new problems now.

We generally want to aim for somewhere between 64-68°F for reservoir temperature. Around 70-72°F is where the bad stuff starts to grow, even moreso the higher it gets from there.

With an additive like hydroguard the reservoir can hit low to high 70s without that happening, but not every case is exactly the same (location/environment) and sometimes it takes a higher dosage than others or even combination of products to deal with it.