The new leaves coming in on my wee Northern Lights have a yellow tinge. The LEDs are functioning, and water has been changed regularly and is bubbling happily away. I don’t have a PH pen or any gadgets to verify water quality.

I haven’t opened a ticket at this time being Saturday and all. I’m not even sure if it is something to be concerned about at this stage. 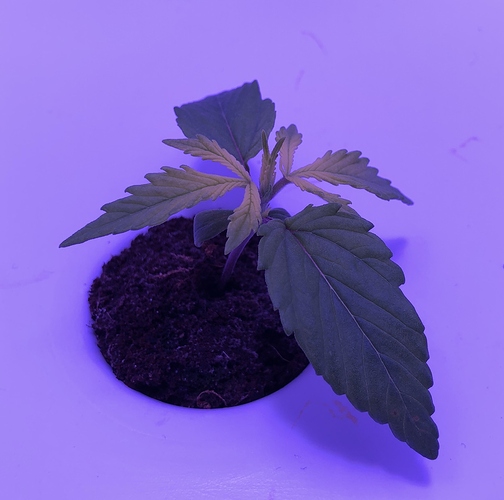 Any tips would be greatly appreciated!

Get a ticket in asap! I know its the weekend but youll never know when someone will pop up to check on things, and it puts you in line for a quicker reply.
It could be the beginning stages of a ph problem, so hard to tell by the lighting of the picture.

Iron deficiencies cause the middle and newest leaves to turn yellow, but they will slowly turn green as the plant gets older 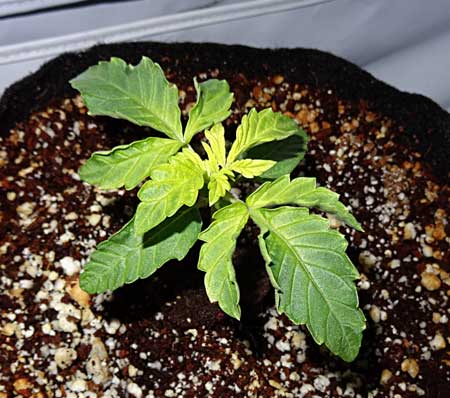 I’ll submit a ticket right away.

What kind of water are you using?

It is RO water from a supermarket dispenser. I’ve used the same source for two previous successful grows.

Are your probes clean? Just making sure

Might be that it didn’t get a nute dosage if it was supposed to get one. Have to wait till Monday sadly… they almost need to have weekend support cause problems like this I’m sure need to be addressed right away being so young

Get a PH meter

Yes, I cleaned and calibrated probes before starting this grow. I checked the nute levels, but not the tubes. I’ll check them out, thanks.

Turns out the float switches didn’t register properly on the last water change, and nutes weren’t dispensed as a result. All the floats move freely, so unsure what exactly happened, and they are looking into it.

I did another complete water change prior to hearing back from support. I could hear the nutes being dispensed right afterwards, and could see the leaves starting to green within a few hours. It looks kinda cool because the greening is following the veins.

Happy to see the plant recovering. But the float issue isn’t new, and as mentioned they are looking into it. I’ve had quite a few instances where the unit did not automatically stop filling or draining. It is not consistent, and sometimes happens on the fill, sometimes on the drain cycle. Usually not at all. It occurred several times on both previous grows, and I soon learned to watch as it fills and drains. I could “pause” either cycle via the app, but the only way I could get it to stop was to disconnect the power.

I never really worried about it too much before because the plants were doing well, and the reboot always seemed to take care of it.

could see the leaves starting to green within a few hours