I live essentially directly north of you and have almost the exact weather. Only difference is we get snow and einter 8 months a year. My house humidity is 30 to 35. And with 2 humidifers running 24 / 7 i can maintain between 58 and 62 for most of the day. I dont know why it spikes. 25c all day at 60 rh and 26c and crashes to 50 or jumps to 70+
Roo. Is sealed. I check on it hourly as i have no outside monitoring tools

That’s crazy! Temp rise and humidity rise makes sense but not that high. The weird thing is the 50% on temp rise. I wish we had winter 8 months a year lol. This 110F+ week has been killing me!

Just read that Cannatrols won’t be shipping until August due to electrical component sourcing issues.

Yeah i dont understand either. But have kept it consistent for majority of time so not too worried as it corrects itself quite quickly in the small room

I just figured this out after scrolling through the thread again. My username was made from my job working with fire suppression systems for datacenters, not the fire we all hope for when growing…I feel dumb right now

Just read this and i’m going to implement on this grow…I’m all about experiments!

Some growers have discovered a strange spectral trick to get higher terpene and cannabinoid levels. It goes against the natural seasonal light shift, but it can increase terpenes by a reported 50%.

At the end of flowering, in the final 3-7 days, growers return to a spectrum with lots of blue light. Sometimes, they switch bulbs from HPS back to MH (if their ballasts are compatible). Or — if they’re running tunable LEDs — they can simply change the settings on their controller.

It’s unclear why the change in spectrum — which would be unnatural outdoors — produces more terpenes. Some growers think that it’s a stress response because blue light has more energy than other wavelengths. Other growers wonder if the plants “think” they’re back in the vegetative phase and they push more growth as a response. It’s as though the blue light sparks growth, except the growth goes into the buds and overall terpene levels instead of foliage.

Either way, switching back to a bluish, vegetative-phase spectrum increases the quality of many varieties of cannabis. With more terpenes, the crop has a higher market value — and the grower has a higher reputation for producing high-quality product.

I’m with you on experiments. This is the key to growing top shelf… At work we always have test plants. We try on them first based on results is what we do to the balance. You have the right mind set for success. You have the drive!! I’m looking followed to see you results in the future Grows.

And cool to keep in black light tank setup too! 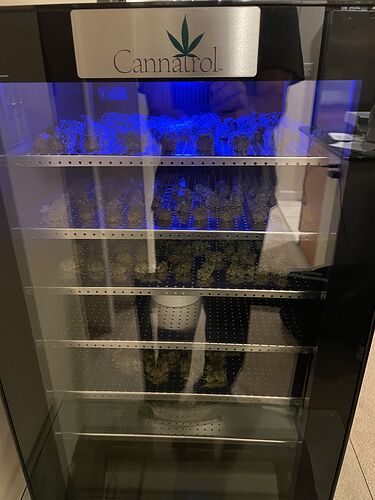 This machine is the dream guys, set it and forget it. It dries, cures and holds. I have 5 oz curing right now for about a month. Will be ready by mid-July. The buds I pull from this are packed full of terps and the buds stick to any bags you put them in. The smell stays amazing and the process couldn’t be easier, seriously worth the money, no lie.

Did you change any of the presets when you did yours?
I did a 7 day dry and then 21 days.

Also, did you hang yours for a day to dry before or do you put your budd in wet? I was reading the pro tips and they suggest a dry hang first. I’m asking as I was deciding what to do with the next batch going in very soon.

Would you buy that before expanding to a 2nd tent? That costs as much as a new setup but would eliminate the entire “drying process” which imo is wasteful, this does it in an amazing manner.

I do a wet trim, take off all the fan leaves and some of the huge sugar leaves, then hang the entire plant for 24 hours. My first time I dried for 7 days, then cured for 21 days. I tried the buds and was blown away how sticky the buds were and the flavor was pretty good. I decided to cure for another week and was glad I did, the bud got smoother and the flavor really started to pop. I had to pull those buds out at 30 days of cure and am happy with results but if I had more time I would have pushed it closer to 45 days.

I didn’t plan out my grow timing well but have fixed that since so I have a solid 2 months in between harvests so I plan on using all 60+ days for drying/curing. I have that bud in mason jars now with b packs and they are still sticky and tasty months and months later.

I now weigh the shelves periodically and adjust the dry cycle time accordingly.

I have a friend who supplies dispensaries with his grows and when I showed him this thing he literally wept, wish I was lying but it’s true. He said that he has lost/ruined some of the best grows due to drying/curing problems and issues. He now owns two of the boxes.

So to answer your question, yes I would have prioritized the box over the expansion to the second tent. I am a critical consumer and this thing so far has delivered. I live close to where it’s made in Vermont so I like the idea that I can show up at their front door if it needs repairs.

Thanks for that info. Good stuff.
Can’t wait to get the next batch in there.

What in the sorcery is this …

My two lollipop autos in the Start. 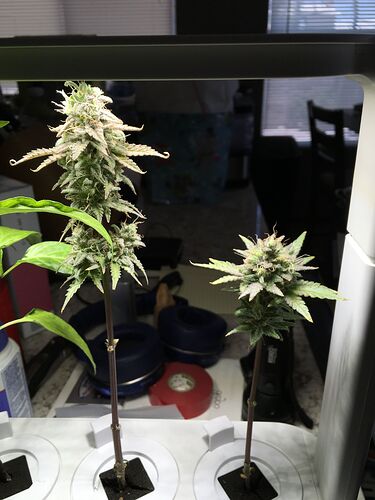