RIP Amnesia Haze, lived about 11 weeks, will be missed

Just my opinion but probably why u are experiencing dampening off. I understand about the water waste. That is why I have a funnel and bucket just for fills. What I don’t use I funnel it back to jug!

Yeah, dump that distilled water back in! I don’t use a funnel, I have practice from years and years working in a kitchen pouring various liquids into containers haha

Thanks, I remember reading your posts and talking about this during germ with you @pyromancy.

I don’t know if you recall, but I tried some training too early with plant twisties and damaged the stem and that’s what caused the hole there- I had it taped up for a few days and then thought it was healing pretty good. I didn’t realize just how much it was leaning back over I guess and I think that spot might’ve been getting some moisture maybe??? Not sure, because it was looking better previously imo. It also felt stronger a week ago than it does now, even though it’s bushier now. Like the stalk feels looser and more wiggly in the pod. Hoping keeping it stabilized with help strengthen it back up. Do you think I should tape that hole back up or leave it?

I use the same bucket for draining so I haven’t wanted to pour water back into my gallon in case there are any contaminants in it. I guess if I designate that gallon solely for Grobo, it ought to be okay… I also fill my humidifier with distilled.

Ah I remember now, I did read that about the early training, I forgot about that.

I don’t really know whether to tape it or not… but it doesn’t look too bad honestly and won’t really affect anything as far as I can tell since the plant is growing and getting stronger as far as I could tell, so taping it might not be necessary. I highly doubt a hole that small will make her fall over alone, I think it’s more or less the potential damping off that might be occuring that would be the cause of any leaning.

I feel like keeping it stabilized will probably help, as well as moving the pod up to dry it out and try to get some more oxygen present in the cocopod.

I hope for the best and hope she fights through this! Looking at the pics it doesn’t seem like it’s too terrible honestly, one plus side is that its thicker down there than it is up the stem instead of vice versa which would mean she would fall over eventually. Keep giving her love and do your best to keep it dry down there!

Wow there’s been quite an improvement in the stalk in just 24 hours after moving the coco pod up! Or is it just wishful thinking on my part? 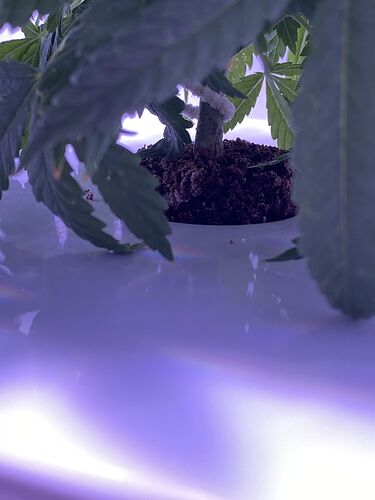 image3024×4032 634 KB
Are all of the freshly exposed roots going to die? If you look closely, you’ll see there are quite a few main veins exposed. This stem pic here is from this morning, if the better lighting wasn’ta giveaway 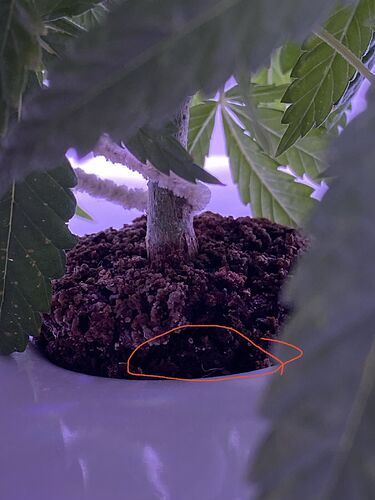 I think you’re fine with the roots. I can’t imagine it will hurt much. Those are tiny little ones!

I wasn’t worried about the little stringy ones. I don’t see the spot in today’s pictures. In fact, she’s praying harder today as well! Perhaps those roots retreated inside more. I think what I’m talking about is a tad clearer on the bigger picture zoomed in cuz once you crop it it loses a little clarity. And it’s not all that clear to start with. I sort of outlined the area here but I photographed the same area this morning and I’m not seeing the same thing. It originally kind of looked like looked like a spider with a lot of wormy legs. You can see two roots coming down and then a network of roots below, all slightly covered in coco.
Pictures of the pod today… like I said, I can’t see the same thing, but I do see a few other roots. 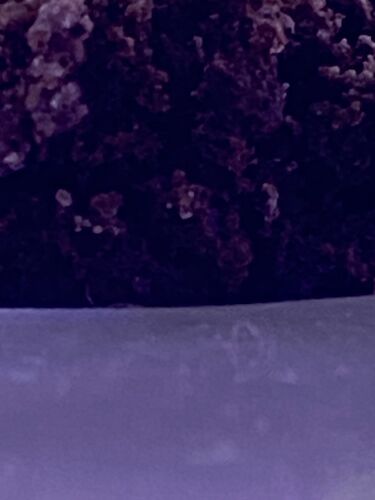 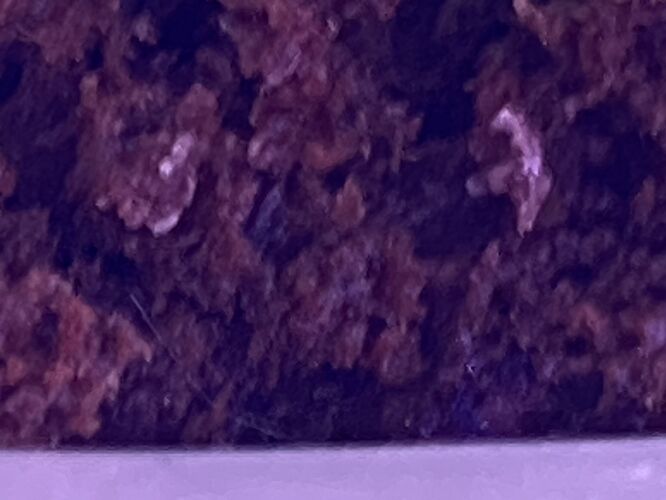 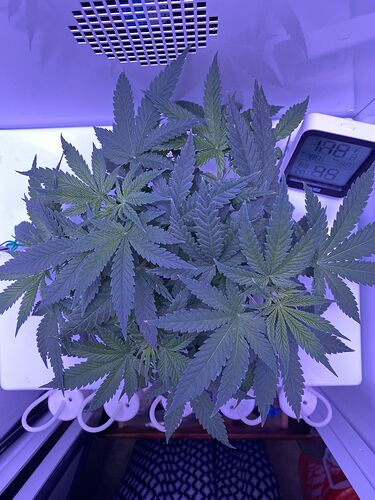 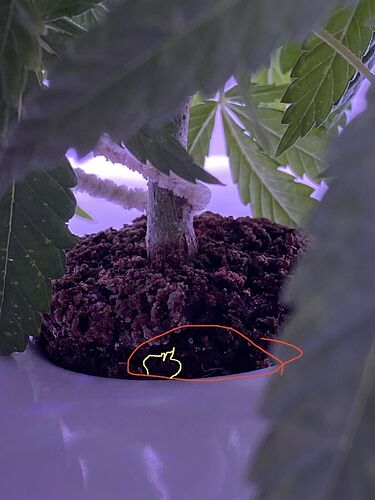 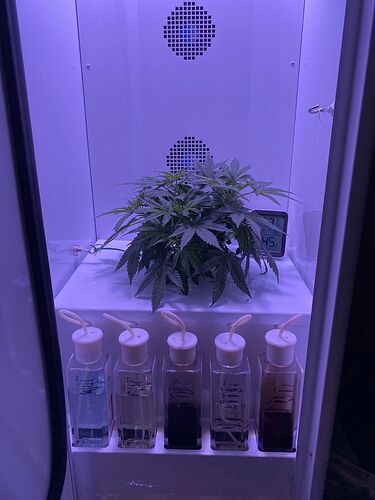 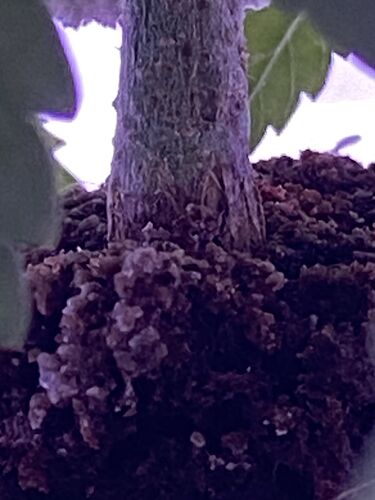 She sucked dem roots right back up

Haha… Yeah I didn’t notice much on the pic.

She is looking happy up top! That’s a great sign! I have a feeling you’re going to be A-okay! 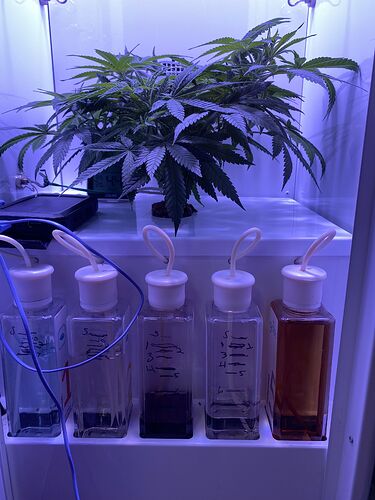 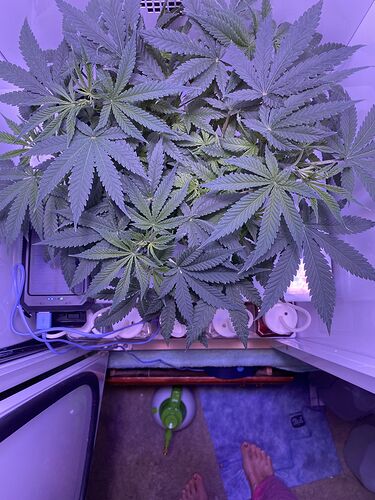 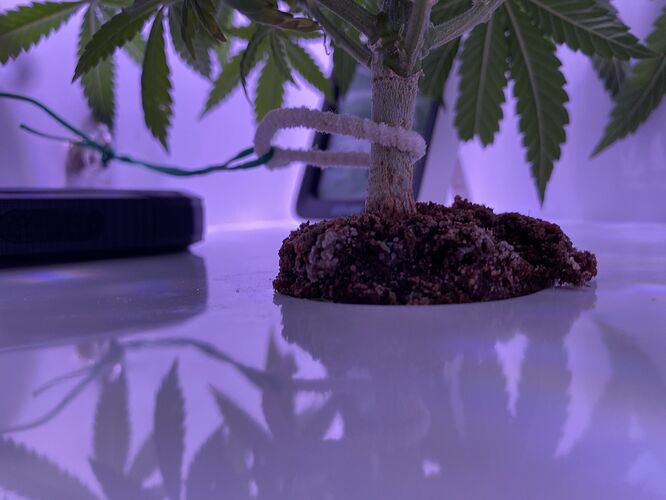 Looking good! Man, when you look from the top it looks like a big bush and then from the side pic it doesn’t look as big, kinda like an optical illusion!

Thanks! She’s very full. Of LOVE! As you can see, she’s rather heart shaped. When I push the sides down, the canopy is more level but there is less and less room to do so now so I think we’ll just see where she is after 4 weeks in late veg on Weds and flip Thurs regardless of height. I’m hoping for1/2 way-3/4 to the 2nd fan. Fingers crossed!

I found a spider on her last night!

Omgosh, you wouldn’t believe how much she’s been drinking and making fans work extra hard! Btw, I did get a solar powered charger and it will power 1 4" fan for a LONG time as the spectrum (at least during veg) does charge it, though solar charging takes a long time and is meant for emergency use, yadda yadda. It doesn’t last super long powering 2 4" fans, I charge once a day, should probably charge twice. Just an FYI. I’ve been topping off at least every other day. Yesterday she drank 1/2 gallon and I just gave her water Friday night!! I’m taking that as a good sign that she’s really going to start growing taller. But what do I know? LOL!! 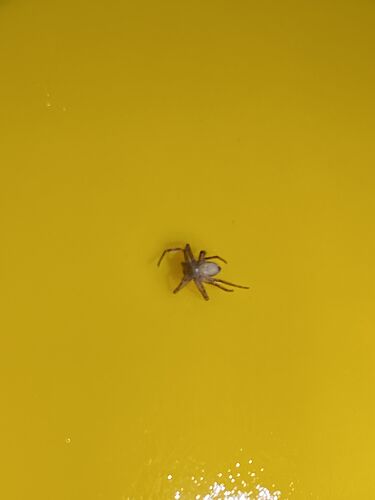 Boy, it must have thought it found the perfect home too. Lol!

Yeah, that far into Late Veg she’s probably drinking much more! Time to stock up on some extra distilled

I’m gonna have to start topping more often myself, I’m about two to three weeks behind you.

Okay just when I think damping off color seems better, I mean… comparatively speaking the color has been improving. If you’ve noticed, it was particularly darker on the right side and somewhat darker in front as well.

The side seems to be doing so much better, the gaping hole at the very bottom that looked like something was coming out of it has pretty much closed, leaving almost like a water stain above it.

It’s been staying dark in the front and last night I was blotting and gave the coco right there a little push down. I found a very pale stalk below with two more apparent holes. 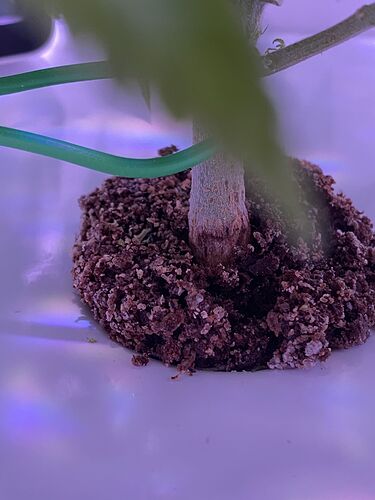 This paleness seeming more positive than negative, I continued to set my fan and tonight it looks much sadder. 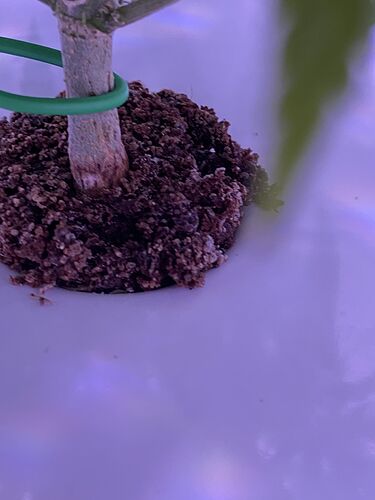 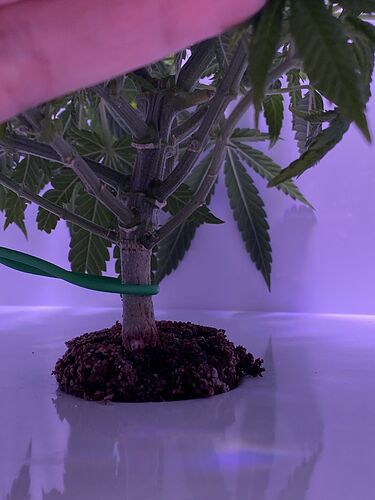 You can see that she appears to be losing stability now at the base even though the holes appear a bit better. Zoomed out you can also see the entire stalk up to topping point. 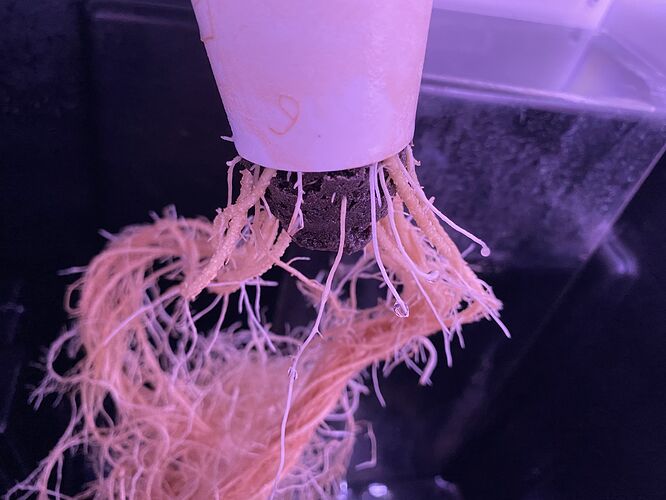 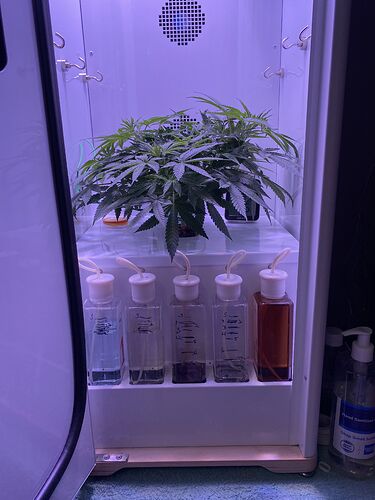 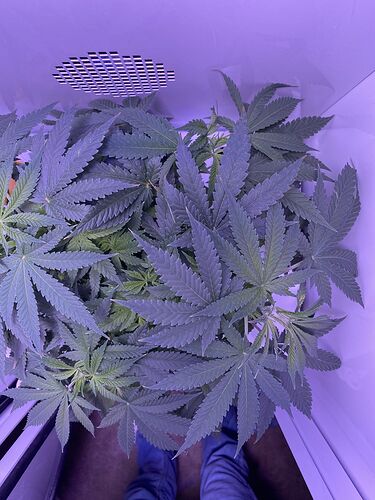 Wondering if I should cover the spot back up? What to do?! Weds will be 4 weeks in late veg.

All help is appreciated!

I think keeping the spot uncovered will only add to the airflow and less wet coco touching it, I can’t imagine it would hurt?

She still seems okay, fighting through it!

That late vegetation water fill doesn’t help at all when it comes to a dry pod.

If you’re talking about the little limp she has going on, I don’t really know if that’s caused by the bottom of the stalk or not, but it seems like she just chose to grow that way kinda? Has it been like that for awhile?

If you’re talking about the little limp she has going on, I don’t really know if that’s caused by the bottom of the stalk or not, but it seems like she just chose to grow that way kinda? Has it been like that for awhile?

Do you mean how she angles to the right where all the growth starts? Easy answer,m- my early training. I only did it for a few days but it stuck! First the lean went toward the back when I stopped but a as she lost vegetation below all that’s left on the right of the plant now is one top lol! When I pull that top over, it always looks like a more even plant too.

Oh boy what’s happening now? I opened grobo tonight and saw 2 wet spots on a leaf, only they’re not wet!! They feel totally dry! Any ideas? 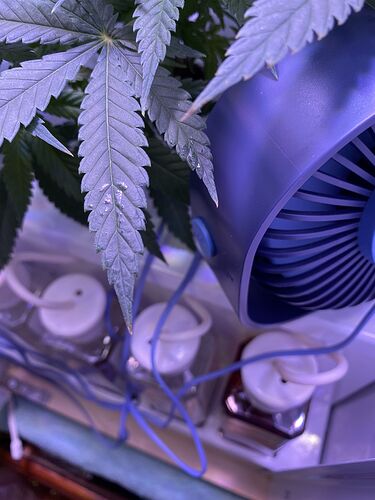 Also this. Could I have TMV? Well sure. I smoke. Have seen curved tips on leaves from pretty much the beginning. But I also stole a leaf from near this spot earlier today so could it also be maybe taking nutrients? 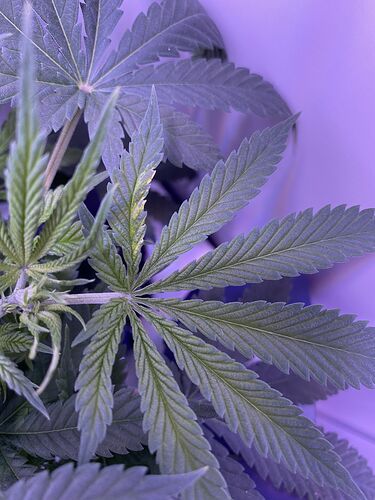 And latest picture of stem. 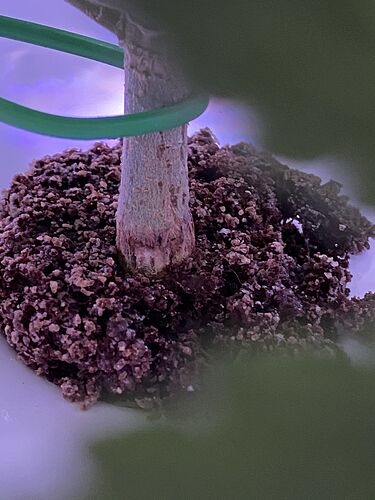 overall, looking great as a plant 🪴 Sorry you are having the difficulties