Recieved nutrient kit. Are all bottles 1-5 supposed to be full? Number two is at just above the logo level- while the rest go to the top of the label. Seal doesnt look to be broken. Wasn’t sure if this is normal level- or if theres a bottle issue.

thanks & looking forward to getting my grobo 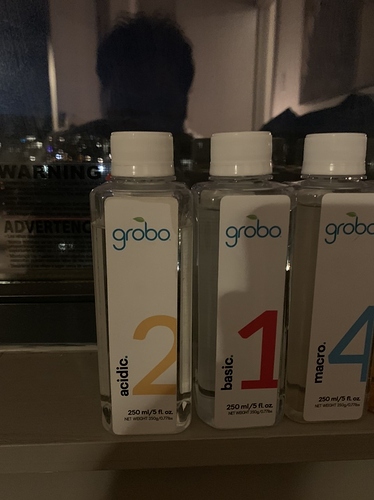 Yes this is normal, there is a variance between the label and the shoulder of the bottle for a full bottle. Good luck with your 1st grow! 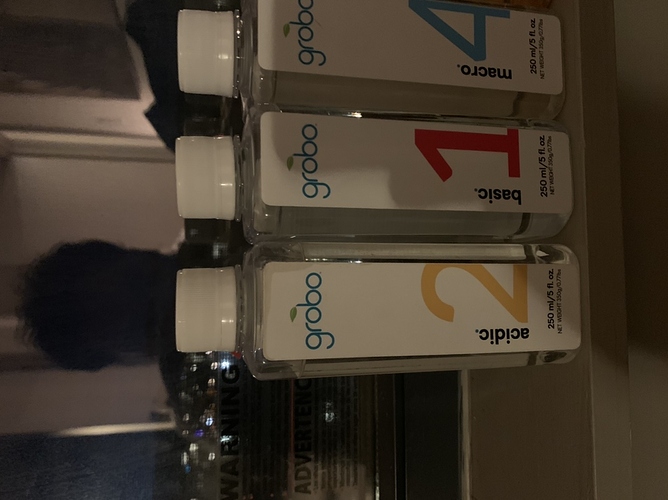 Interesting. @Stephen
This seems pretty large amount of varience even compared to the 2nd lowest bottle.

Looks like some cost cutting bs!! Filling little bottles from big bottles is whet me thinks

!!! And even if not, then those “machines” filling the bottles need to be recalibrated!!! @bjorn this is absolutely unacceptable!!! Yes I use my own nutes and have from nearly the beginning, but that is besides the point. EVERY bottle should be filled exactly the same if a machine is involved, which isn’t happening, thus I can infer y’all are filling little bottles from big by hand. If not someone in quality control needs a stern talking to!!! Your stuff is wayyyy to expensive for this shyte to be happening!! You are in the process of moving backwards rather than forwards on this and many other things. Get it together people!!! We’ve spent a shit ton of money on the box alone! If you want to continue to sell your nutes, then be consistent and treat the consumer right!!! Each and every person with a box can easily feed their own nutes manually and at an much, much cheaper price point! Sad to say, but you’re acting more like an American company than a Canadian one

And you as an individual grobo owner can boycott and protest by simply adding your own nutes at a serious fraction of the price of them and shipping!! The only way companies really listen. Has and hem all you want, but Change only happens when a company or person is hit in the pocketbook

I for one am sick of hearing these quality control problems and the lame excuses which inevitably follow. This and the above may sound harsh, but someone has to say enough. I welcome your comments and inevitable excuses as to why it’s not their fault

lots of good points and feedback @Osage . You have more overall experience than myself with Grobo- since I am new to growing as well as am still waiting on my unit to start. Good News is that @Stephen Stephen was quick to help resolve the issue (and offer replacement) as sharing the photo was able to show them the amount of difference that I mentioned in the post.

I know that there are growing pains and issues that pop up- especially with smaller companies who are still scaling and improving their processes- but it is nice to at least see that issues like these aren’t completely ignored. My guess is that I might eventually move to using my own nutes- but at least wanted to do my first grow or two using grobo nutes while I am learning.

Stephen was quick to help resolve the issue (and offer replacement)

Hey sandy, I personally think @Stephen is great as are most of the team. Not bashing them at all. What I’m tired of “hearing” are customers experiencing the same problems over and over, and yet there seems never to be a real fix. I believe whoever is doing quality control, is either sleeping at the wheel, or sampling Stephens product

. But for me the fact that nute bottles aren’t all EXACTLY the same amount is beyond ridiculous, especially if they are using a machine to fill. When you buy something you want all of it. Some I’m sure are saying, what’s the big deal, so it’s missing half an inch or inch of liquid, big deal, who cares. Well take into account how many people are using their nutes, coupled with the fact it usually takes all the nutes out of the bottle in one grow, well now that some of the nute mixture is missing, the grower will now have to buy another set of nutes to finish off the grow upping the cost exponentially when calculated across all their customers who are using their nutes. As a company it definitely helps their bottom line, but screws the customer. From here on out it will take two sets of nutes to do one run as opposed to the one set previously needed. Almost seems like some idea that came up in a meeting about cost cutting and coming up with ways to generate more revenue. Not saying that’s what happened, but being privy to a multitude of shady practices by companies the world over, and it’s not that much of a stretch. Point is the same problems should not persist from customer to customer. And nute bottles should ALWAYS be EXACTLY the same amount!

Well said, thank you for giving us ALL that reminder.
I don’t think Grobo is in the business to purposefully rip anyone off.

I would agree there, but continued issues being the same for a large group of users, doesn’t bode well. The bottles should be a no brainer too