As I’m sure most people know hydroguard isn’t sold in Canada. I went to my local Hydro Store they feel that this product Marijane is pretty much the same product does anyone know anything about it?

Below is both labels 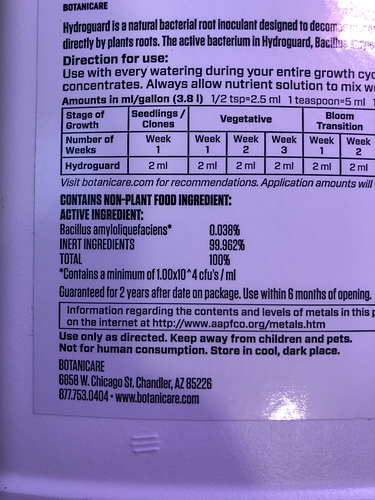 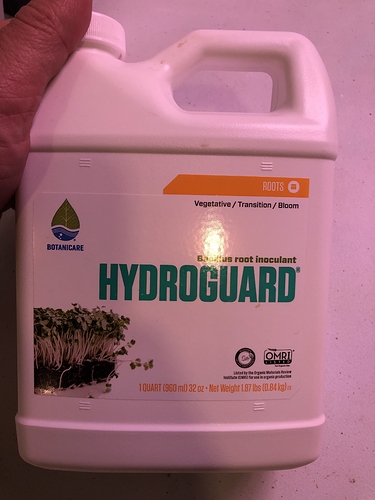 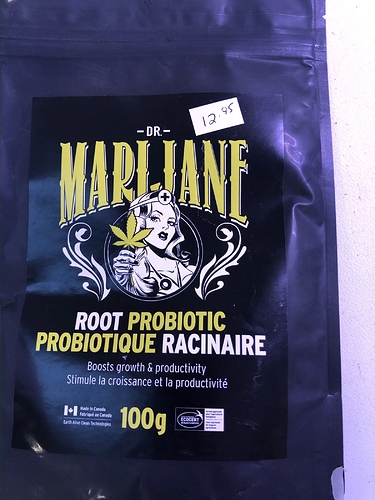 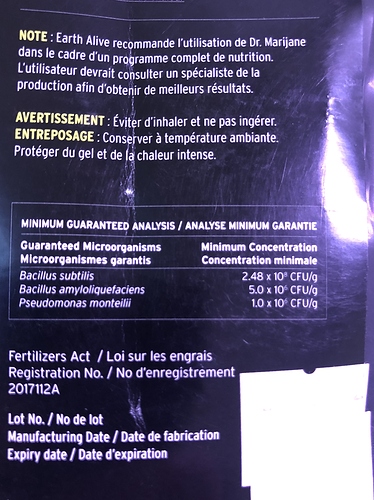 If my calculations are correct, you can put 8g 2g of this in 1L of water and would end up with about the same concentration (CFU-wise) as a 1L bottle of hydroguard (ignoring the differences in specific or proprietary strains).

From there you could follow the hydroguard dosing instructions using about 2mL per gallon for a total of 5mL per res change. That 1L mixed is your bottle of hydroguard!

Anyone else care to check my math? There’s a similarly higher-concentrated product in the US (Southern AG fungicide) but it comes in liquid form. Something like this in powder form would be more ideal and lasting. I’m also in need of a bottle of hydroguard, this is great timing!

EDIT: double-checked math and it seems only 2g would be needed, not 8g

Do you feel this product is the same as hydroguard? I ask because I can get hydroguard just I have to drive across the boarder to get it (2.5 hour round trip) which I would do but if this is just as good / the same it’s only a 10 minute drive for me to get…lol

Ps also thanks for the math

The answer to your question is both yes and no, but I do think they are “pretty much the same” in terms of what they are and do.

My understanding is that the hydroguard product (from botanicare) uses a proprietary strain of the bacteria named “bacillus amyloliquefaciens”, which in their case is claimed to be “very aggressive” (or in other words they are really tough cookies).

I’m unsure how much more (or less) aggressive they are than that found in other products, but from a quantity perspective the numbers I provided should give a good baseline to test equivalence with. Personally, I’d probably beef up the concentration a bit and add 3-4x as much to 1L if using this instead of hydroguard.

Another product that contains some of the same bacteria (as well as many other beneficial bacteria and fungi) is Great White, by the way: https://plantrevolution.com/products/great-white, which comes in liquid or powder form.

The one you’ve found is the least expensive I’ve seen.

Here is the dose guide for review 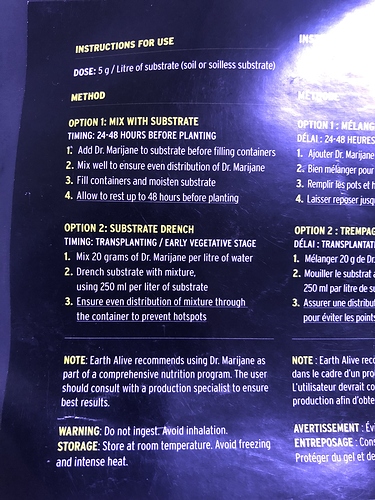 Are you in Ontario? Cause I bought hydroguard. Took me a little to find but it wasn’t super hard. Just ordered it, a store in Mississauga carries it I’ll have to look up what the site was

I just took a look they have it listed for $85.00 is that what you paid? I paid $20.00 Us funds for my last bottle seems pricey unless I just got a deal not sure. Thanks for the site

Honestly I don’t remember. This was last year, I’ll see if I can look up the invoice. I’m sure it’s mark up and the trouble of getting it over the border.

I was getting hydroguard for $50 CDN but also noticed the price hike (locally) to $80+/quart recently. Will give the Dr Marijane a try and share my results.

I thinking the same thing I was going to try 7g / L then use 15 ml of that for a water change with Grobo what rate where you going to try? Do you think if the rate is to high would it be harmful? Been trying to figure out the correct rate (your data was helpful)

Using too much isn’t bad except perhaps if it’s messing with PPM/pH – that’d be a reason to keep it to a minimum. I’ve used quite a bit at once with no ill effects, though my understanding is that once a colony has formed less or none can be used for the remainder of the grow, or at most just adding more at week 6 like voodoo juice recommends. I’ll be doing that with my next grows; that’d be another way to cut back on consumption/cost.

1L might be overkill to mix at once. I’ll be mixing smaller batches like 50-100mL as that’s still enough for a few weeks of drain/fills. Thinking 1/10th - 2/10ths of a gram in 100mL of distilled or RO water as a starting point. With Hydroguard I usually add 12mL to the water for the res (1mL per L) and this mix ratio of Dr Marijane should keep that consistent.

I’ve since made changes that let me control the temperature better in the room, but still add a little bit as a backup should the AC fail or power issue causes a temporary overheat of the reservoir. When I was having overheat issues I used quite a bit of it (about 48mL per res change).

What I’ve gathered about the dosage of amyloliquefaciens (Hydroguard) is to first determine if water temp is exceeding 72°F; by how much and for how long. That trait defines how active (or dormant) the bad bacteria will be and how much of the good ones will be needed to defend or combat them.

With that in mind, a small amount seems to suffice for a res that reaches 72°F but stays at least 1-2° below most of the time. If it’s sitting above that temp for long periods I’d probably up the dosage a bit, with 2x probably being more than enough in most cases. Checking the EC/pH helps but when it’s only small amounts being added it should barely even register. My understanding is that too much can cause problems such as pH swings and nutrient composition or uptake issues, but that it’s not easy to accomplish that when using a reduced concentration formula like Hydroguard (or when diluting something like this in water first).

Also, using “Mycos” ( mycorrhizae) helped a lot in addition to Hydroguard. I thought these were just for soil, but have helped considerably in the grobo as well to give my tortured plants more of a fighting chance; or so that’s what I’ve seemed to witness.

Wow thanks for all this information love it. I think I read this like 5 times now and I
after work I’m going to read it again!!

Question I just ran out of my Hydro-guard and I was going to mix a small batch of Dr Marijane for my next grow. My question is have you tried it yet if so would you have a recommendations on Rate / how its working for you?

I’m just behind you, still have a bit of hydroguard left.

I would try about 1 gram of that stuff to 1L of water, or even just 750mL to make it a bit stronger than hydroguard is. That will result in a mixture that is similar to hydroguard, so then you would add 12mL or so of that to the reservoir with each drain/fill. In short - that mixed 1L is just like your old jug of hydroguard.

That also keeps the measurements the same for how much to add to the reservoir afterward.

I mixed 2g of the DrMJ to 800mL water today in my old hydroguard bottle. Have only used about 24mL during my drain/fills so far but am wondering if they’re water activated and how long that’ll last on shelf. The color and mixture looks good at that rate, almost seems too strong which isn’t a bad thing.

One thing to point out to anyone thinking about trying this is that the liquid form is much easier to handle!! These powders need to be handled with care and shouldn’t be inhaled or spilled. It can easily get messy or even dangerous if not careful. I also use great white and root rescue which come with similar cautions so this is no different, but that is worth mention. It’s much less expensive but also much less convenient.

Can Dr Marijane be used to treat root rot? Hydroguard does for sure.