I wouldn’t be worried about it, it’s pretty common.

Most agree that it is the initial shock of nutrients introduced, which more than likely had started on your 2nd drain and fill on the start of Day 15 I would imagine… did they show up before or after that drain and fill?

Also, orangish spots can also be caused by a lack of Cal/Mag which is your #5 bottle in the Grobo. Do you know if it had dispensed properly in your last drain and fill? It’s good advice to mark the levels of the bottles to make sure the nutrients dispense and an added bonus of being able to see the amount per stages of the grow/how much it actually dispenses.

Watching them dispense is another option, but marking still is a good idea because you never know if something will come up that you need to walk away from the Grobo while waiting for the nutrients; this actually happened to me personally and I’m glad I marked them, had company stop over for a quick minute so I had to answer the door while the Grobo nutes were about to dispense.

The biggest takeaway is that your NEW growth looks good, lower leaves more than likely will eventually shrivel and die as your plant progresses or you will remove them anyway for defoliation purposes, so as long as the new stuff isn’t affected you’re probably fine. 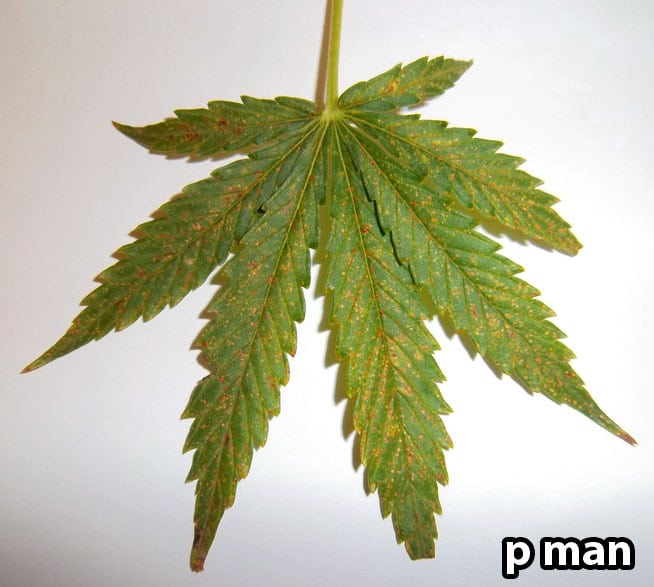 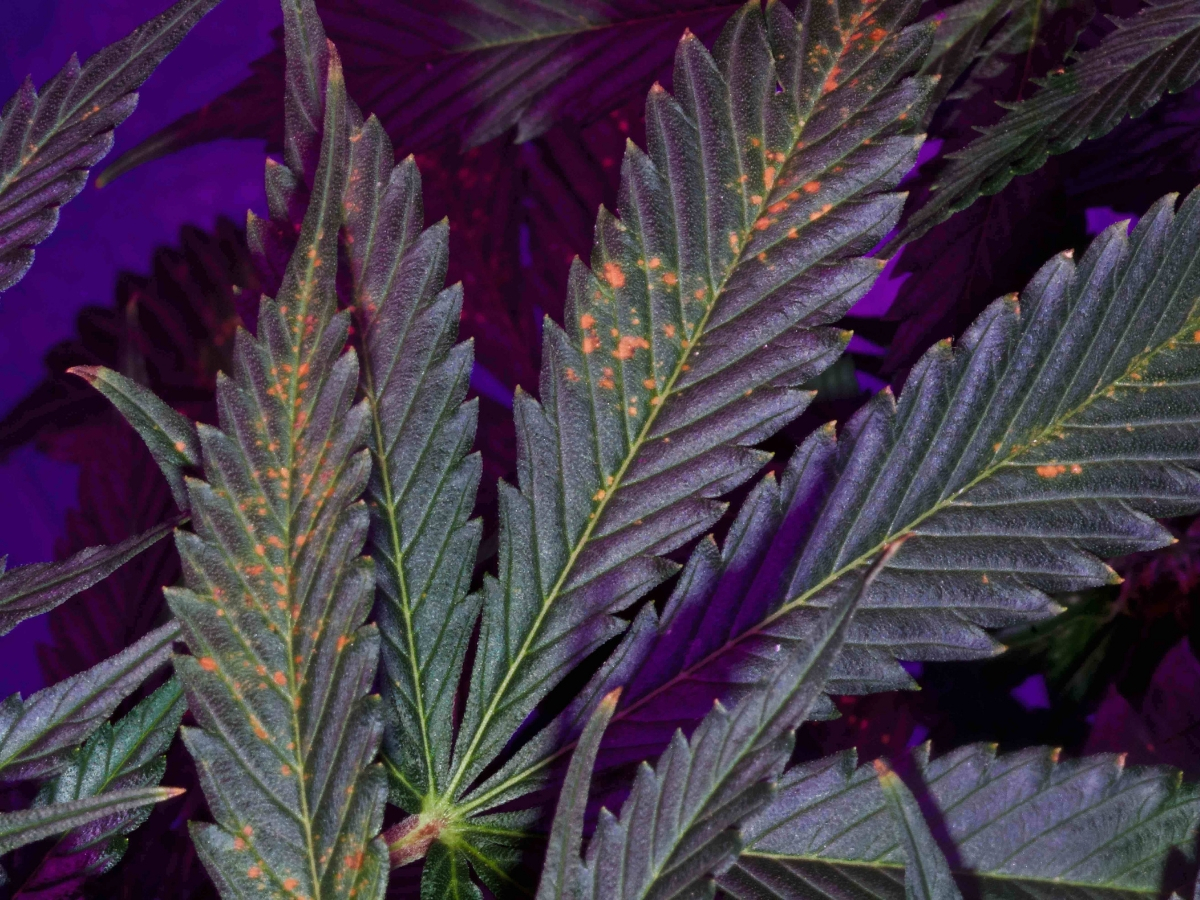 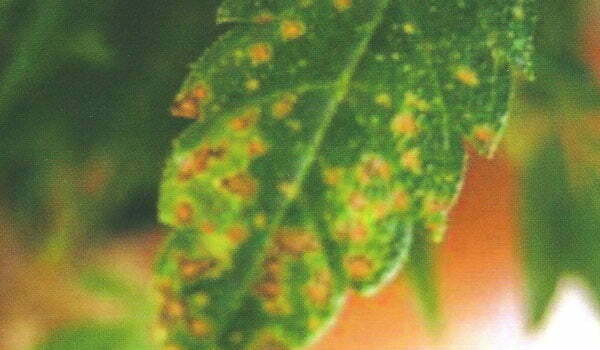 ^ Thus is why bottle #5 might be of concern. Some plants like more than others, so it may not be quite enough for it but it doesn’t seem too extreme

Wow, thanks for the write up! I didn’t get a chance to mark the bottles/keep an eye on the nutrients while dispensing, but I’ll start on my next drain. Seems like there might be a slight magnesium shortage if anything, but I’ll keep an eye out

Not sure if I should start trimming some bottom leaves / add my support racks soon, but my nutrients seem to be dispensing properly after refills. 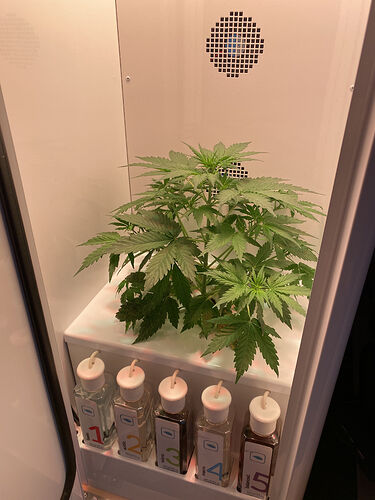 2 days later, lots of growth. Starting to get more concerned about pruning/installing my support racks/angling leaves to get the most light… any helpful threads around on maintaining a grow? 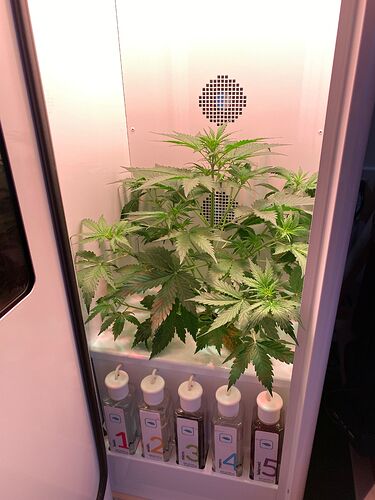 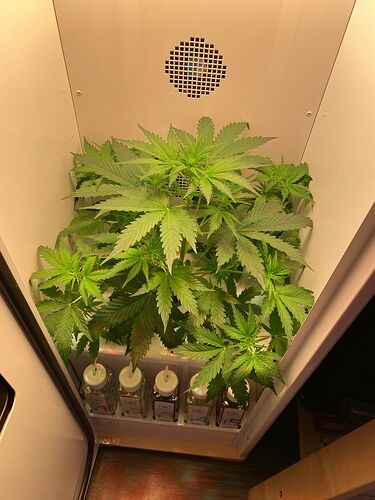 Your support might be hard to get in now. With that said she looks speead out ok, maybe just take off the 4 fan leafs in the centre blocking all your bud sites.

Just to clarify… you mean these? Also, the main stem seems pretty sturdy so support racks might be overkill/pointless at this point. Will wait and use them for drying out my harvest. 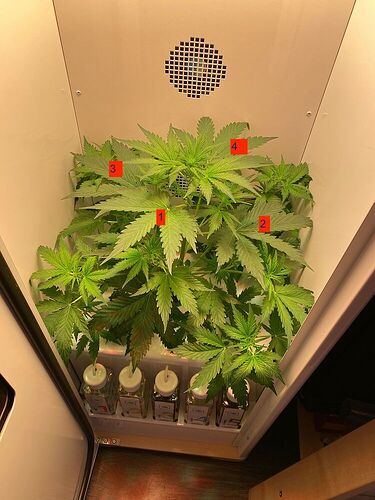 I love this plant 🪴💚 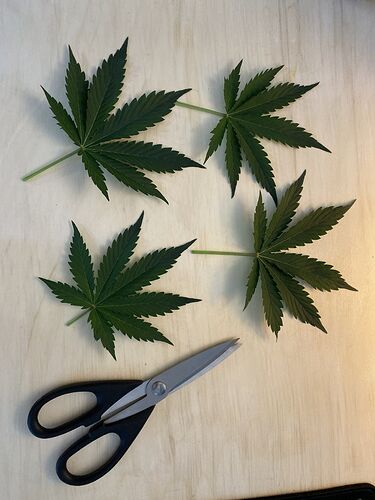 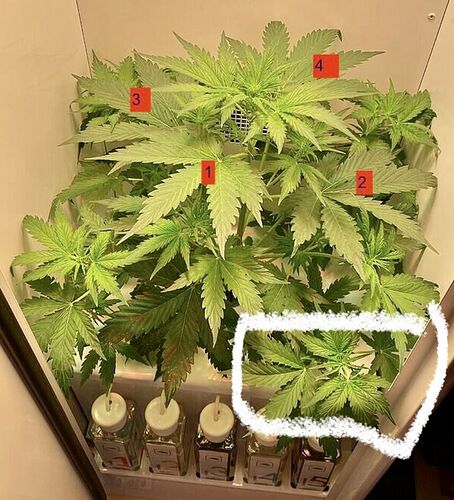 @Fluffhead LOL, kinda concerned about that area. Might try to rig some kind of support system with a rack to pull that section back a tad.

Send a side shot?

Away from home til tomorrow night, will snap a pic then.

Do you have the Grobo support wires? Just throw one in there and hold it up that way

Day 36. Just changed the water, trimmed some dying leaves and installed some support racks. Not putting much stress on any branches… just pulled back the parts touching the door and angled some sections that were casting shadows on bottom leaves. 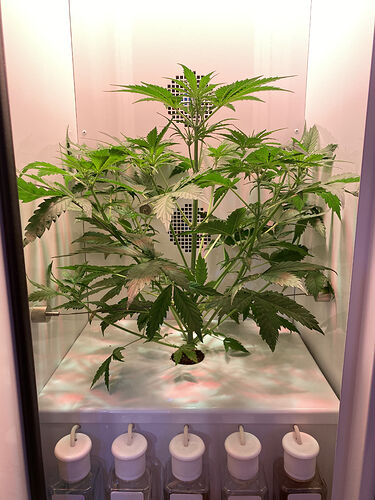 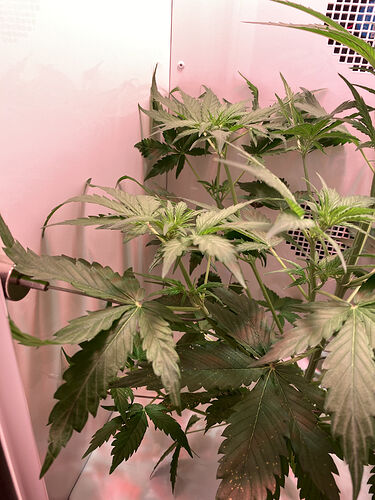 I love Sour Diesel. Made a nice recovery from the Calcium deficiency. Well done.

Day 39 – was away for 2 days, came back to lots of growth. Just installed another support rack to keep everything inside the box. I’m thinking I should do some trimming but not 100% sure where… are the ones marked in red safe to cut? Any other areas? 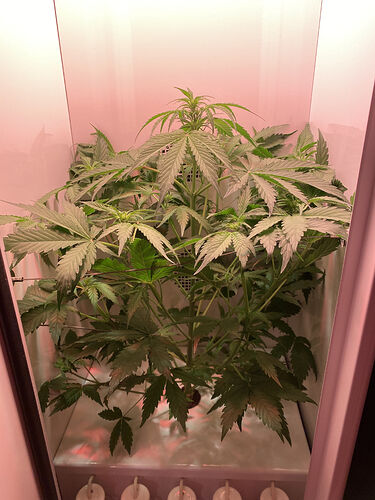 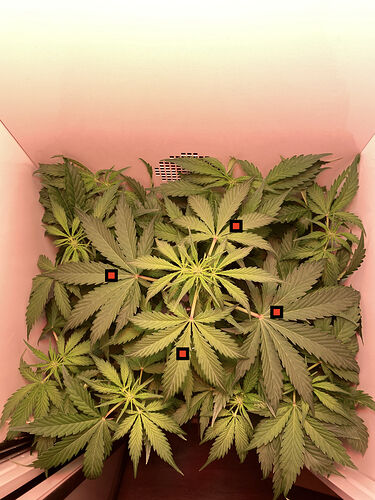 Yes you can take those leaves marked in red. Nice job identifying those ones.

Today is water change day, but I was planning on visiting family until tomorrow… anyone know if waiting another day will impact the plant much?

Nope will be fine