First grow and a question

Here is my first grow, day 21. What are my next steps? 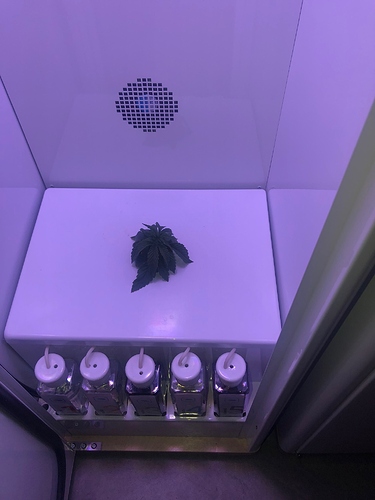 Also bottle #1 is almost empty not sure if you can see by the picture, is this normal? 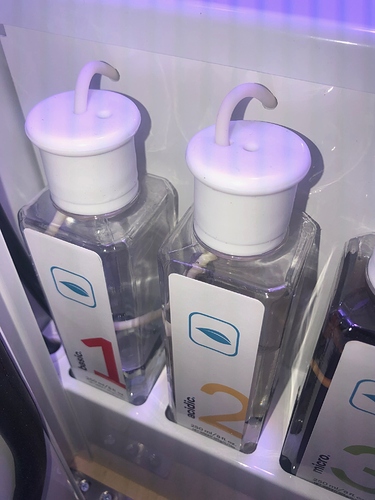 Thanks for any help.

That is a tremendous amount of #1 and even #2 for day 21 which makes me think there’s a problem with your pH pen. The plant also looks a tad bit droopy to me, which could also be the same thing. I would suggest a pH probe calibration if you have the supplies to do so. You’ll need:

What kind of water are you using? Tap, Distilled, Reverse Osmosis? 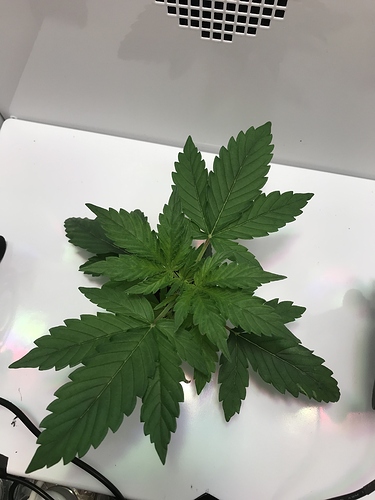 Using distilled and doing the water drains and fills as instructed. Sounds like I need to get some calibration supplies ASAP.

Yeah I would suggest it. Here’s my bottles at Day 24 using distilled. 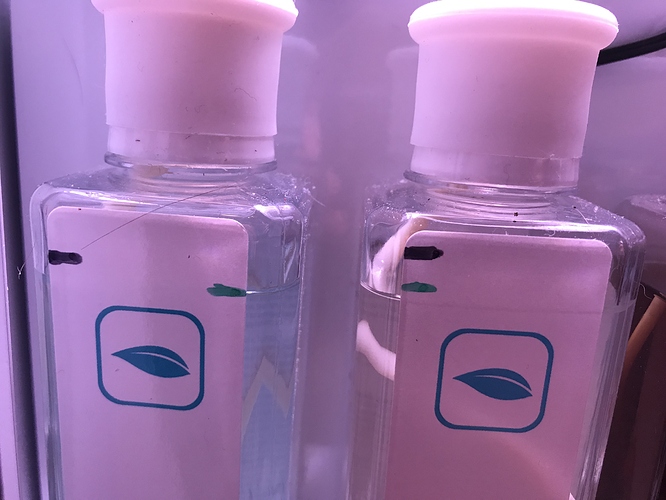 I was told to do a pH calibration myself: I wanted to believe the probe was good out of the box but I ended up calibrating around the start of early veg because a user here pointed out something they saw with my plant.

Heh, I see a cat hair on my bottle

And some dust buildup… Gonna have to do a wipe down soon inside the Grobo… Might do that today. I have dust mats on the back of my Grobo to prevent it from sucking in but I do open the door from time to time to get a close look at things so it’s inevitable… two cats…

#1 bottle being gone would mean that the Grobo thinks your pH is too low in your distilled water, which is kinda strange for it to be constantly low… are you using additive nutrients ?

I think a good course of action would be

You should be able to save her.

Nope no additive nutrients just what came in the box. I’ll get calibrating as soon as I can. Going to look for stuff today.

Calibration kit ordered will be here Tuesday, I guess I better order #1 bottle too.

Until your probes are calibrated, I would unplug the #1 and #2 bottles and do a immediate water change

If you have any means to test your PH, you should do that and balance the water manually until you calibrate your probes

That was a good call @Vicc I actually had some PH test strips and WOW! was the water Alkaline, so did exactly what you suggested. I would suggest folks get some of those test strips as another diagnostic tool. I plan on testing my water a bit more until I trust my PH sensor.

Plant all ready looking better with a drain and fill, disconnected #1 and #2, waiting for my kit to calibrate the PH sensor.

Glad you were able to change the water and get it to proper ph. Your probes are definately uncalibrated and going all in with those bottles.

Nornally those bottles are not used much since the ph nornally does not swing that hard.

I use an aquarium ph monitor to monitor my water PH its super accurate and much cheaper than a hydro branded one. I use Milwaukee instrument (which I found a used one on craigslist for $60 and bought a bnc replacement probe). Keep in mind, you will not be able to check your water as frequent when you plant gets bigger.

What are my next steps 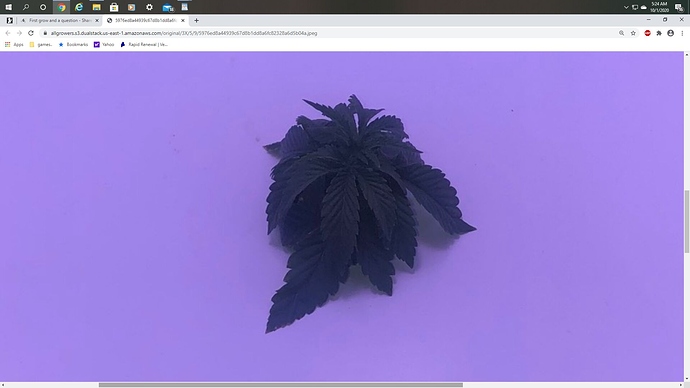 Wow was my probe filthy, started cleaning that probe and it was visibly dirty, so a good cleaning and a good calibration and all tested healthy, Did all that on Tuesday and this morning Friday I could tell that bottle #1 is at the same level, and the plant looks much better. I now know to have a calibration kit on hand, and I will be calibrating at the very least at the beginning of each grow.

This forum rules and thanks for everyone’s help!

From reading other folks stories it is recommended to calibrate your probe about every 4 weeks.

Glad you got it figured out! Good stuff.

So now I have even more questions:

This is what she looks like now at day 29: 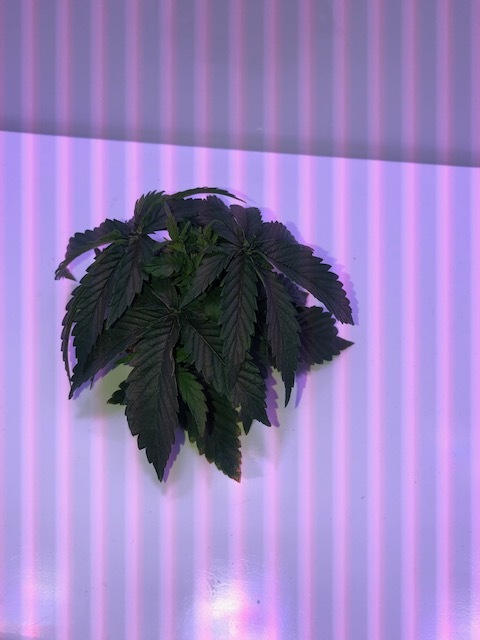 A lot better than she use to, topped and it’s starting to get two more stems.

However how is the humidity and temp, I live in the high desert so humidity is a hard one to maintain: 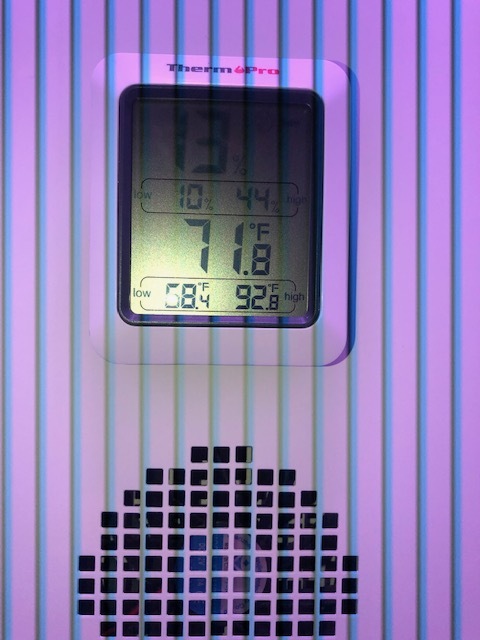 Also roots look a little brown and I have a white powder all over the tank: 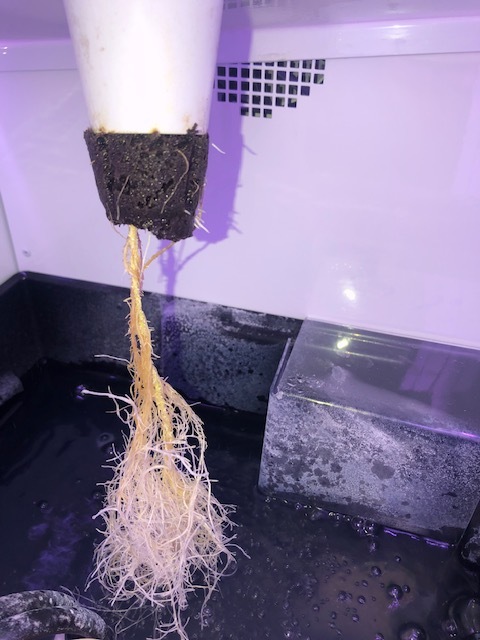 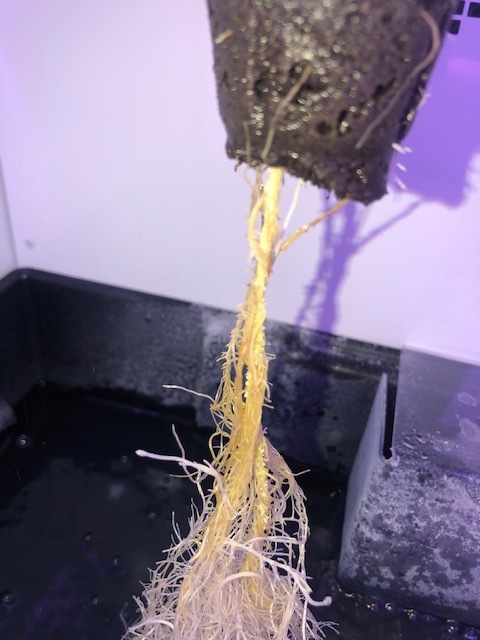 So, what do you think?

Ah, that is really low humidity… Plants like 45% to 60% humidity during veg. The temp looks okay though… Too low of humidity can act as a stress factor for stunting growth as far as I’ve read as it becomes a tough environment for the plant to thrive in.

I honestly don’t know what that white residue all over is, but the roots definitely are looking kinda brown… especially the two coming out from the top that are a darker brown than the rest.

I’m not sure 100% but I can only imagine there’s some kind of fungus or bacteria going on down there that is possibly the start of root rot.

The only other thing might be discoloration from nutrients, and that might be what caused the white residue as well, but if you’re not using anything other than Grobo nutrients I would think something is off.

EDIT: I just noticed your High temp was 92.8F, which is super hot, and then a low of 68.4… how often is it up in the 90’s range? That’s actually pretty hot… it isn’t always a cause for concern as some genetics can withstand those heats, but the problem might be that it would cause your water reservoir to heat up past 72 or 73 F which is breeding grounds for root rot… which would tie in to the browning of the roots.

Two tools you should possibly also invest in (I know, there’s a ton of shit besides the Grobo) is a water temperature gauge and also Hydroguard to add beneficial bacteria to give you a fighting chance against high water reservoir temps that reach over 72F. It’s recommended to start with the beginning of the grow to colonize the bacteria early on to basically “build an army” to have a better foot against anything that might come up later. I also heard @vegetato recommend to soak his cocopod in water that has Hydroguard already added to give that little extra boost from the get-go.

The desert is a tough climate to deal with my friend! I can only imagine… I’m probably going to be combatting high humidity during flower here soon so I’m gonna have to get a dehumidifier.

Also, you can get a large humidifier that can treat an entire room ( as to keep it away from the Grobo as much as possible to avoid condensation ) to try to raise your RH

The only thing that I can think of was how alkaline the water was before I calibrated the PH probe.