Hi, I’m currently day 19 of flowering and wondering do I need to do a bit of a trim. I’ve seen in a lot of forums that they say not to trim at all when flowering. What is everyone’s thoughts on this? 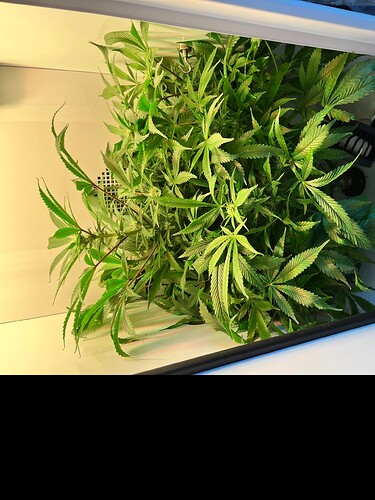 YES ABSOLUTELY she needs a haircut

Thanks, I’ve watched that a few times but doesn’t mention anything about trimming when in flowering. Lots of things I’ve seen warn against it.

I would cut some of those big ones no matter what would happen, as it looks like it was not trimmed much before…

If you did hear not to trim during flowering, the plant was probably properly trimmed before going into it. I can’t think of anyone that would tell you to not trim that, maybe I am wrong though.

Awesome, thanks for the advice. Will give it a trim when I change the water in a few days.

I am not a trimmer either, see some of my pics.

I finally did clean it up a little right before going into flowering as everyone was saying the less leaves and things the more juice gets to the good ones.

I appreciate your investigation. Doing nothing will not benefit your plant as you stand the chance of having moisture through condensation with the leaves touching. At this point, she needs a haircut, it’s better to do it earlier in flower than later.