Okay sweet!! I like your regiment. I only used big bud for 3 weeks, as recommended on the bottle. I’ll be more liberal next time and instead add ~2ml/wk for 5 weeks as you did. Looks amazing!

I bought those lights @Chad_Johnson

Awesome! I dont think I prefaced, but I bought 2 sets for my grobo bc each one is a string of two lights. I’ll post some pics of my rigged up installation job later today. Lol

I remember seeing one pic. I will check the two out and then see if I wanna buy another set or return @Chad_Johnson

Would love to see how you did it. Hoping to run this strain next. I think I’ll try using Mylar before adding lights b/c I have plenty on hand. Just need to spend the time doing it.

Alright @Fluffhead and @OrionsCeiling and anyone else that wants to know how I did my extra lighting. The link above are the lights O bought. They come on a string with 2 lights so I bought two sets that way I had one light for each corner of the grobo.
Other supplies I used:
4 ft of Wood corner molding (any hardware/lumber store)
A roll of magnetic tape
Invisible tape
I cut the molding into 4-one foot pieces. Stick the magnetic tape to the back of each piece of wood . And then just a strip of invisible tape around the top and bottom of each light to house it to the wood/magnet (invisible tape looks kinda raggedy but its the only thing I could think of that would work

)
Once they are all together, run the cords through the back of the grobo and out of the small rectangular hole (you will have to remove the plate covering the hole) Pictures and a gif attached to show more detail. If I didnt touch on everything, let me know 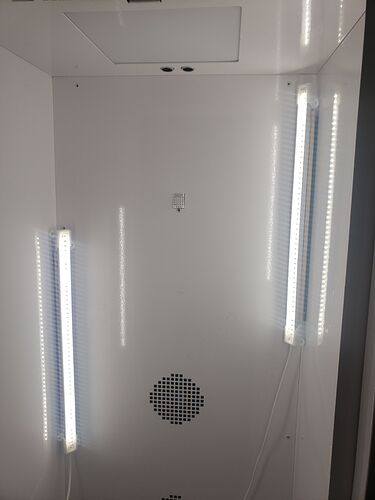 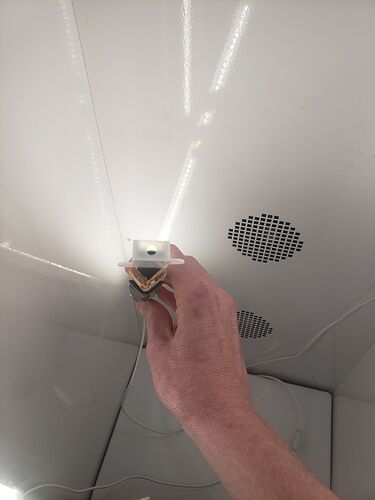 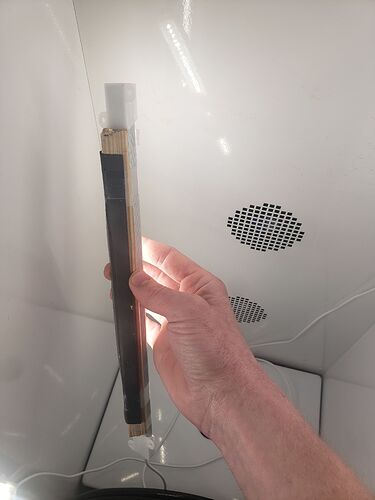 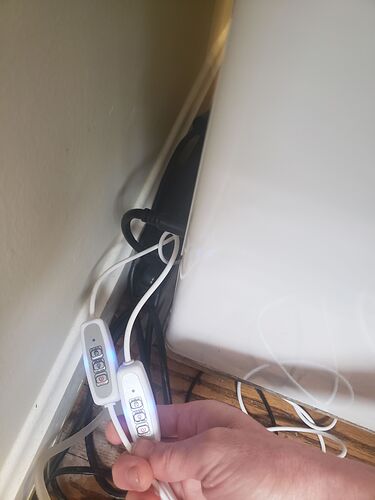 Thanks Todd! That means especially more to me coming from you. You were the first person to jump in and help me when I had no clue what I was doing. I appreciate all of your knowledge!

Hey @Chad_Johnson you did a great job explaining and I must say I love GIFs and you used the format perfectly. That doesn’t look raggedy at all! I was gonna say it looks super clean and I suppose my only question is, how did you keep your light on a timer? As in, the Grobo lights are timed and the additional string lights are not.

Since you grew an auto, I understand that the light schedule is less important and it is okay to have the lights on 24 on 0 off. Do you think this method would work for Photoperiods too?

I already have a light that I could see being beneficial inside the Grobo as supplemental light and I’m eager to implement it. I think I have an idea but I wouldn’t have had it without your initiative!! I’m going to post about it tomorrow to find more opinions but I think the light I have would work perfectly.

And I’m curious if I should try this critical purple auto from Grower’s Choice in order to see how I can do. I think that might be the move

Thanks so much for your regiment by the way. I’ve learned so much from both you and @Todd.grobo gonna try and get this next grow to develop a new level of understanding between myself and the plant.

I’m glad you asked about the timer bc I meant to mention that… I knew I was forgetting something. Lol… I have a smart plug so I was going to set it to turn on and off at the same time as the grobo lights, however one downside to the lights I bought is that you have to physically push the power button on the switch for the lights to get them to turn on. So I ended up manually turning them on every morning and I used my smart plug to turn them off every night. I get up at the same time every morning so i just made sure my grobo light schedule matched my wake up time. There are probably other light options where the smartplug could work for off and on so that would be another option. Im excited for your next grow! I will be following that one for sure!

Oh great! I was hoping I was catching on to your situation.

Previously, I purchased some lights that came with those buttons from Amazon but they won’t work with a timer for the same reason. That is my dilemma.

Unfortunately I do not sleep in the same house as my Grobo every night so I need it as automated as possible. I don’t have a camera so I keep my faith in the universe that my electricity and WiFi remain connected. I lost wifi for over a week with this current grow and I’d rather not have that happen again. So needless to say, manually turning the added lights on every day will not be an option.

I have a smart plug I’m eager to use, so that’s what I’ll be using. The light I have I actually bought because it does not have those buttons and stays on. I must say, the dedication to your craft is impressive, sir! And your harvest weight proves as such!

Thanks for the detailed response it’s very encouraging and I can’t wait to see how it goes.

I greatly appreciate the compliments

Congrats on the 5+ ounce harvest! Smoke report should be here soon.

Thank you!!! And yes… smoke report coming by the end of the week! I legit haven’t tried any of it yet and its KILLING ME

After 5 days of jar burping, I switched to vac seal curing based on what @Vicc was doing. After seeing the difference, ill probably vac seal cure everytime. The bud structure, stickiness, and smell all seem to be better going this route. Thanks again @Vicc for the insight! Anyone interested in the process, hop over to Vicc’s most recent grow

SMOKE REPORT:
Bag Appeal: I’ve got several large buds that look great. The sparkle of trichomes is very visible. I included a pic but it doesn’t do justice in showcasing the trichomes.

Density/Feel: At first, the buds were kind of spreading out when curing in jars. As I stated above, I switched to vac seal curing after about 5 days and that really helped the density/feel. I tore off a piece to smoke with my bare hands and my fingers were SO sticky! I would say its not as pretty looking as something from the dispensary, but structure and feel is great! 8/10

Smell: This is probably the 2nd best smelling bud I’ve ever smelled. I had some blueberry muffin that I bought once that smelled exactly like blueberry muffins, so this doesn’t pass that, but it has a wonderful combination of fruity and diesel. Just smelling it let’s me know how potent it is. (This is my 2nd time growing this one. This go around was a night and day difference) 9/10

Taste: Its a very clean, fresh taste. And its probably the smoothest smoke I’ve ever had, no joke. Absolutely no harshness at all. 10/10

High/Effects: This has the effects of a true indica. Smoke during the day at your own risk

Luckily i decided to try it before ned last night. The initial effects are very enlightening, euphoric, and happy. My wife and I split that small amount that is in the grinder in the pic. We smoked with our Mighty. Everything was hilarious at first, we couldn’t stop laughing

. After about 30 min, it gets pretty sedative and helps with pain very well. I slept like a rock last night. Ill post better pics of the buds at a later date.

This was my 3rd grow and I’ve seen a tremendous increase in quality. Im happy to have grown something that i previously grew for a true comparison. The overall quality of this grow is about a 9/10. My 1st go with this strain was about a 5 or 6/10. 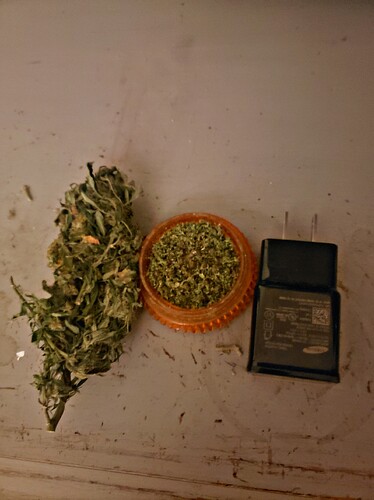 Good job. Happy to hear you grew multiples of the same strain. Always gets easier after one!

Most store bought cannabis has bag appeal due to wet trimming. Not a fan of that myself. Prefer to keep my trichomes in healthy shape by trimming at the end

Looks like a beauty. I chose to grow this exact strain after your grow and I can’t wait to watch her go! Looking forward to it and I appreciate your detailed explanations of everything.

Super excited to see what you do next but the smoke is looking excellent. And your description has me drooling looking forward to my grow

enjoy your bounty. I harvested a mere 28g of bud and I’m itching to try it. Living vicariously through you at the moment

Hahaha. Thanks man! Im actually moving soon so I won’t be growing anything for a couple months unfortunately. When I finally get settled in my new place, ill be growing a blueberry photoperiod from seedsman. I cant wait to watch your critical purple grow