What I've been using instead of Hydroguard and why, plus some ranting

@Tito - a “reason” hasn’t really been zeroed in on yet (besides the water hit 72-73F), but dust is said to carry (a diverse set of) bacteria/fungi that varies quite significantly between different buildings, environments, and seasons. The curiosity I have is just whether this factor might play a (significant) role when trying to avoid root zone pathogens – you can see the dust collecting on my fans in pics, which I don’t see in many others’ grows. My wife has problems making sourdough since we moved here, which she also believes is due to a similar if not same factor.

This current combination has done more to keep the water clear after trying hydroguard and orca (but not dm zone). Pool grade chlorine was recently substituted for the bleach, and besides the few hours in 1000ppm solution to clean off the slime originally, the concentration being added to the reservoir equates to about 1-2ppm total which should flush out if it’s even still present in the plant (tap water is allowed to have more than this). At this level it’s actually considered a nutrient to some plants from what I’ve read; as it’s been used in tobacco grows for decades and for tomatoes as well (the latter of which we don’t smoke, so it gets processed differently, yeah).

This is not meant to be followed so much as inform anyone else who might have the same idea. This is what happened for me when I tried it.

What is boggling me is how your grobo isn’t just turning itself off over and over again – my light shuts off for 5 mins here and there if it gets too warm (in the 75-80F range). That’s a separate issue to the water temperature.

Putting it in the garage is not an option for me but that would be nice. Originally, for the first 4-5 weeks of my first grow, things were looking much different. That’s when a second unit was purchased (used) to get them growing on alternating schedules for more frequent harvests. Before I even had a chance to use the other unit the first one became infected.

Also noticed that you’re still on your first grow and the roots look pretty funky but she’s still growing strong and flowering. For one, you used a clone (not a seed) so that’s already a variable which could’ve played a part - the immunity from the mother/existing plant cells is my first thought but hormones also come to mind. Did you use any rooting powder or anything like that, any additives to water besides grobo nutrients? Trying from clone would be an option for me though it’s less choice on strain.

Here’s some pics from today, +1 day from the prior pics a reply or few above this post: 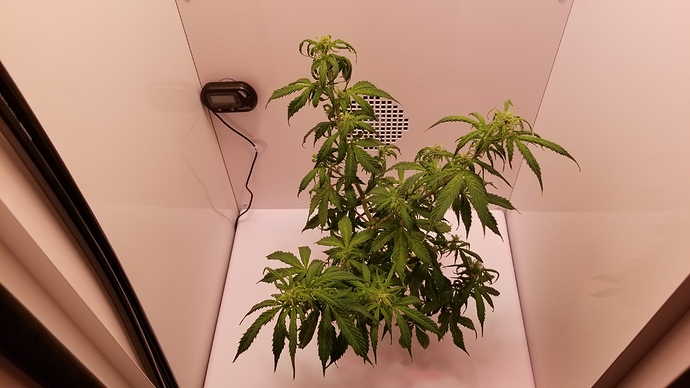 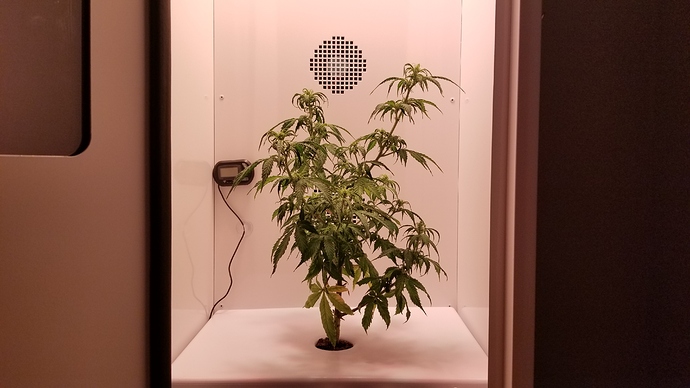 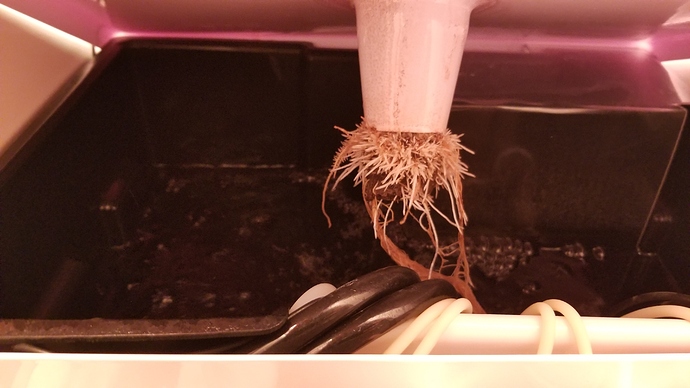 Here’s the other one: 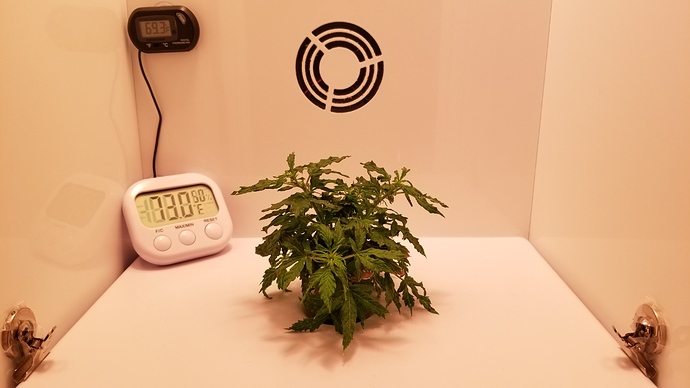 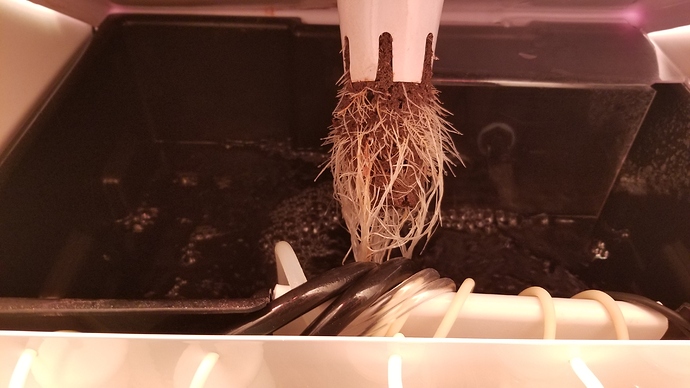 Fist ones not too happy at all. I’d feel the brown roots for slime. Second one looks better though

Agreed first one doesn’t look 100%
@vegetato
The grobo powers off when over heats such as the fan breaking or blocked airflow or genersllybeing in a hot space.
I personally have had this bits in my reservoir which is typically parts of the plant that have died and broken off and end up sitting on the cover and potentially slip through the cracks under the cover into the reservoir. I try to remove these when I see them. I do agree with you that i think they need more than vinegar to clean but i think the trick is not nesc what you use but how well you clean it. Its tricky to get in some spots when your a giant human.

Grobo has never turned off on its own, and I have the Wattage meter to prove it. My roots look fine, not sure what you’re talking about. The only color they have is from the nutrients in the tank and big buds which commonly can stain them a bit. No slime, no smell. Clone was commercially bought in SoCal, rooted in rockwool and then transplanted to the coco pod. Chiller and hydroguard started 30 days in.

Your grow setup is producing issues and you’re using bleach because widely used methods aren’t working. Mine was the same way and I got a chiller and hydroguard from Amazon with no issues (and I keep my hydroguard on top of the grobo too).

Have you completed a grow and harvested? From what I can read, you’re still on your first grow too. Difference is I’m taking the advice of the pros on here and not trying to find a niche remedy to a problem until I try the others. Could be why I’m flowering

I’m not posting my comments for you to heed, I’m leaving them here so other noobs don’t come and get ideas.

This is my 3rd or 4th attempt in grobo if counting both units. These grows aren’t as important since the outdoor grows were successful this year (measured in lbs), which is why I’m inclined to experiment with alternative (and inexpensive/low risk) methods in the grobos.

I did try several of the pro’s suggestions here, except for the water chiller. As mentioned, the intent is not to take the (increased) risk of waking up or coming home to water everywhere hence trying to find some combination that works before taking a more extreme measure. If this experiment doesn’t work the reservoirs are coming out and these will be soil boxes which was my original plan prior to coming across grobo advertising.

Once these are completed I’m going to do one with chlorine and one without and start to narrow things down further. Did cooling the water prior to introduction fix my issue, or was it the combo of that and chlorine? And then what other products might work as a safer alternative?

Too much additional cash and time has been invested to watch these die. Have bought equipment like fans and pH pens, cleaning/calibration kits, various additives and other products, different water, humidifier and countless hours of trying to diagnose the behavior and results. If the environmental constraints had been laid out prior to purchase there might’ve be a tent or supercloset in place of these grobos today.

Thank you for your input about additives - that’s helpful. I’ll reiterate – don’t do what I did here it is only meant to inform not to suggest anyone else tries it. At this point my first oz in the grobo will have costed quite a bit.

Sorry about your struggles! I have been dealing with humidity issues and I tried adding water that had been refrigerated over night and it brought the water temp down for a day and a half and then it went back up and has stayed that way for at least a month or longer. I have not added anything in my reservoir due to this. I can’t see any sign that the plant has been affected at all. You can see more details on my topic page of Kush ‘n’ Cookies. I too have a lot of dust in my house because my walls are made of Plaster of Paris but I have never seen any in my grobox even though I have a fan on top directed to the back of it where my wall is open/exposed. I live in Michigan and the weather is always changing. I hope this information can aid you in figuring out the issue and thanks for posting and being honest about your problems. We have to work together!

I have been trying to use a 2-16 ounce frozen water bottles out of the freezer everyday one after the other. My H2O tempurature is now 69 degrees.

You’ll get sick of that right quick!!! I tried it and you get more res temp variation than it’s worth. I’d either get a chiller, or at least try running a fan at the back with the little square hatch open. Seriously

@Cowboymi what helped in my case was to improve the AC in the room. When the room is kept around 21-23°C (and the air from AC is blowing directly toward rear of grobo) it seems to keep things in check.

I’d also recommend to double-check the temperature of the environment inside vs outside the grobo (where it is currently located). What are the internal temps of your unit inside, above the water - and behind it? What I did to get these was just hang a digital thermometer for 20-30 mins in each area at warmest points in day to get an idea.

On top of that, if you live in area with wild temp/RH fluctuations it becomes important to re-evaluate this every so often, to ensure it’s still as it was. For me, winter has been much easier to control temps than summer will be but for some that could be the opposite.

Like @Osage said – try opening the trap door at rear of unit and blowing some air through there, that’s one thing that reduced temps by a degree or few for me as well. Buying a chiller is also an option – the reason I went with AC instead (cool whole room instead of just reservoir) is because I have other grows in the same room that also benefit from it.

Also - to anyone else finding or digging up this thread - using regular bleach (for more than just a quick cleaning) is a bad idea!

After much reading and testing I’ve come to the conclusion that there’s a fine line between acceptable and toxic levels of chlorine for the plant itself - it is very hard to get it right all the time. There are other reasons such as chemical reactions (between it and things like the pH down) to steer clear of it as well, as gasses can be produced that are toxic to humans. This incompatibility is actually mentioned on one of the grobo bottles in fine print on the rear label.

See this post for pics of the products I achieved better results with: Doing my diligence - #11 by vegetato - Welcome - AllGrowers Forum | Hydroponics, Harvesting, Cannabis, and more

Absolutely correct!! Was waiting for that, glad it was you tato

Damn booyyy couldn’t have said it better! You come a long way my friend!!! Keep on keeping on​:+1:

I love your scientific approach and the sharing. Thanks again!

I’m going through the SAME thing. I discovered pool shock a week ago, and still trying to get her back to “normal”. I wish I saw this post earlier. I lost a chunk of my own hair due to stress over this plant.

I’m about to try using a product called API Stress Zyme with my next grow to see how that fares.

It’s made for aquariums and uses heterotrophic bacteria similar to what hydroguard does.

I haven’t been able to locate any details on exactly which genus/species/strain are in the Stress Zyme product but have read about others using it with success in hydroponic and aquaponic environments.

I am not sure, I must be missing something? Hydroguard works well and I only pay $30 2x a year for it. How much are you actually saving to make all this worth it?

The first time I bought hydroguard it was $45 per quart, lately it’s been >$100 (in Canada). Even the local shop that had it a bit less expensive wants $90/bottle+taxes now.

With 3 concurrent grows going the bottle doesn’t last as long either. 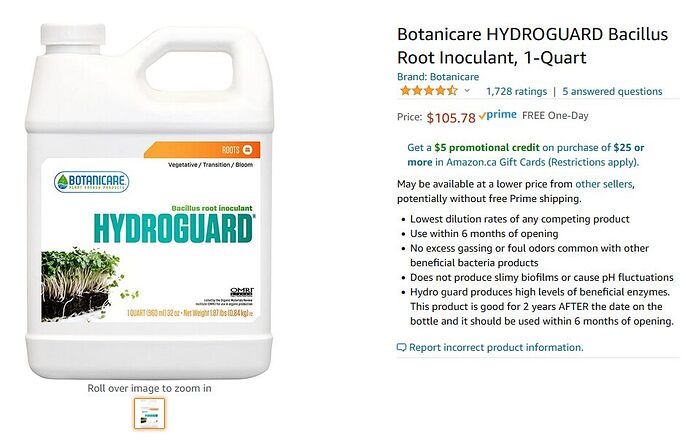 I paid that much @vegetato and I am sure I kept the photos. Worst box damage ever. No hydroguard inside, just a completely soaked box delivered to my house…and smashed completely flat. Why even deliver it? Like seriously