In need of help

To speed things up, can you post a picture of:

Also, can you check that your air stone (bubbler) and air pump are working? There should be bubbles in the reservoir.

Do you use tap water or distilled water as well?

Do you monitor the temperature inside the Grobo? Too cold or too hot could cause some of these issues.

Do you have fans inside the Grobo as add-ons that might be blowing too much air? 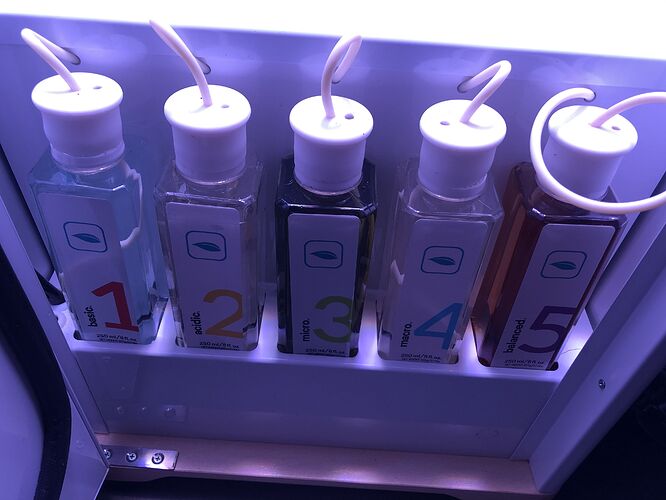 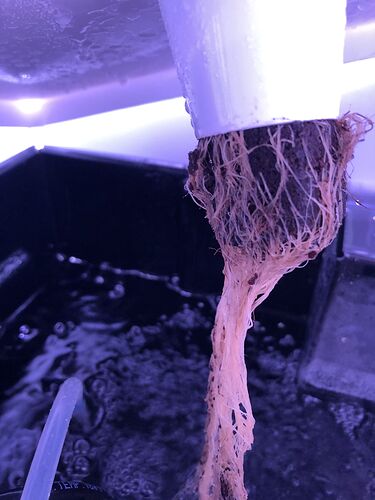 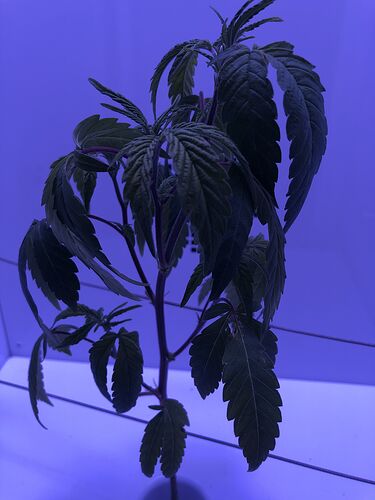 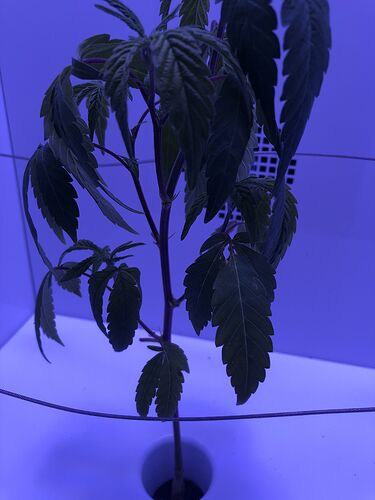 THANK YOU for responding

Here’s an example of what I mean:

Most cannabis plants grow two growth shoots directly opposite from each other.

This seems like some sort of genetic mutation of sorts ! Doesn’t mean it’s a bad thing necessarily, but for the most part what I’ve gathered is that when plants do this they are growing closer to sexual maturity in which they are ready to flower soon… It seems like your plant is doing this early on.

What day is your grow at? I don’t see any of your Bottles #3/#4/#5 dispensed which are the nutrients for the plant! That seems very strange. Some of those tubes seem pretty “pulled out” so I am wondering if they are kinked somehow… Or possibly a dispensing error… You may want to open a ticket at support@grobo.io to ask them about this specifically! A lot of times its simply a kink in the lines… Maybe try pushing those down in the bottles more or checking for kinks?

However, despite that, I think that you have a problem on your hands with how low down your Cocopod is currently. Grobo recommends starting the pod up flush with the top of the lid. I fear that your pod is saturated with water which causes an anaerobic environment (lack of oxygen) which can be bad for the root zone and stalk.

Can you take a close up picture with flash on the phone of the bottom of the stalk? I fear that it looks like your plant may be suffering from “damping off” which is due to the over saturation of the pod as well as a potential attack from bad bacteria of sorts, specifically one called “Pythium” which can attack the root zone as well. When I zoom in it looks like there’s some brown discoloration where it meets the cocopod. Eventually it will cut off oxygen to the plant completely, or the plant can fall over.

It seems like you may possibly have the start of root rot down there too, as the roots kinda look discolored and brown and are bunched together, and also sort of slimey. Bottle #5 can sometimes stain the roots, but it looks like no Bottle #5 has dispensed yet as it looks completely full so I don’t think it is nutrient staining. Do you smell any odors down there? If your water temperatures are hitting anywhere in the 72F range or above it becomes a potential breeding ground for bad bacteria to cause root rot. A product called “Hydroguard” is recommended by Grobo and forum users to help add some “good guy” bacteria down there to colonize and fight off any bad stuff that comes to town.

One way to combat the over saturation of the pod is to push the pod up past the top of the lid, or at the very least flush with the lid… for instance, I started my current grow at this level: [quote=“pyromancy, post:11, topic:8425”] 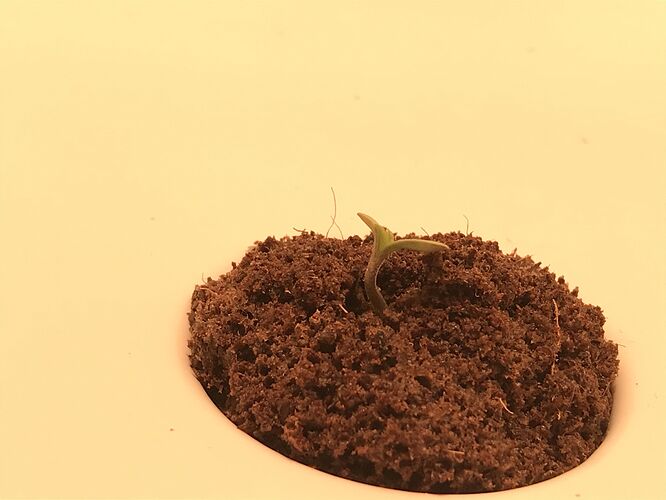 This helps it stay dry and keep oxygen to the stalk. Unfortunately, you will have to be very careful at this stage if you wanted to move the pod up (From underneath) because the roots are popping out like crazy all around it, and moving the pod up now might damage the root system pretty bad.

I hate to say it, but this seems like one heck of a mess unfortunately >< Lots of things here that could be the potential cause of the wilting…

@pyromancy is right on.

Def looking like you have some root rot. That cocopod also seems really low (does it rest in the water?), so I’m guessing that she’s over watered and isn’t getting enough oxygen in the roots due to root rot - which probably means that you’ve got some temperature issues as well.

I’d get some hydroguard and probably raise the cocopod to be flush with the lid and monitor. If you’re still in veg, there is time to save her.

I have no idea what clone cycle the Grobo should be set to… I need 18 hrs on and 6 hrs off for lights. I be moved the pod up…

Oh, is it a clone? That might explain why it looks like it has alternating nodes, because it may have been a clone from a “close-to-flower” mother or vegetative plant maybe? Kinda new to me! Kinda unsure myself.

So… you said you moved the pod up? That’s a good start. One thing I did with my first grow was use little 1 inch or 2 inch squares to start sopping out some of the water to dry it out and increase the oxygen flow. A little fan or two inside the Grobo can help as well, if you have them… but it doesn’t look like you do. Might be a good investment to find one online. These are what I use, and a lot of others on the forums, but there are other options if you search around:

As far as the potential root rot, you can still save that too, however, the first step would be to get some Hydroguard (Amazon maybe? Prime if you’re lucky? Maybe search local for a hydroponic store of some sort if you’re really lucky?) because this will add beneficial bacteria. To clean the roots, you will need some Hydrogen peroxide to soak the roots in using a bucket or a cup of some sort and try to clean all the slime off. The only problem here is if you’re doing this, it kills all good and bad, so the best thing to do would be to clean it up, and then add Hydroguard to build up beneficial bacteria.

I definitely would hit up Grobo and see why your nutrients are not dispensing yet. How long has your plant been in the Grobo, since its a clone?

The clone is four day in🤷🏽‍♀️

To clean the roots, you will need some Hydrogen peroxide to soak the roots in using a bucket or a cup of some sort and try to clean all the slime off. The only problem here is if you’re doing this, it kills all good and bad, so the best thing to do would be to clean it up, and then add Hydroguard to build up beneficial bacteria.

Another option would be to use an enzyme solution like Hygrozyme. wash the roots in it in another container and then do a few drain/fill cycles with a Hygrozyme/Hydroguard/RO water solution. It’ll drive the PH/PPM levels a little crazy for a couple of days while the Hygrozyme strips all the dead root matter making space for the Hydroguard to do it’s wonderful thing. Just depends. H2o2 can stress your already stressed root base and you really have to be careful with the ratio or you could kill her. I’d also incorporate some kind of mycorrhizae. Again, my $.02

Hi grower, I panicked so I took my clone out drained and cleaned my Grobo… Letting the Grobo air out then refilling water(bottle) just under roots, what should be my next step? 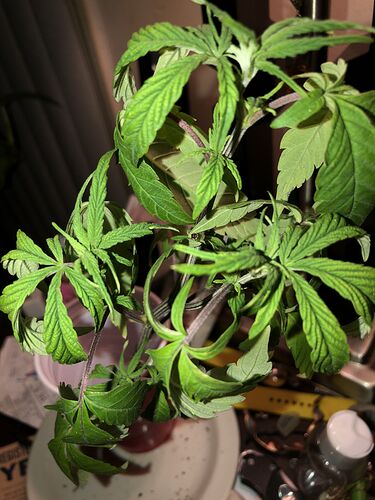 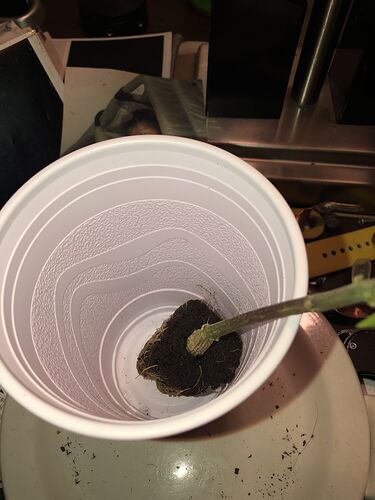 She’s hanging in there😩