I quite literally cannot contain myself but I think tomorrow is last day she’ll see the light!

Waiting til the end is the hardest part.

It’s tough… but look at all that accumulated sugar

It really is. And she just keeps on bulking. Every day feels like the last day but I’m not sure with this one!
One last fill. She’s still producing new pistils but the trichomes are like 30% amber. I’m thinking ready after today. 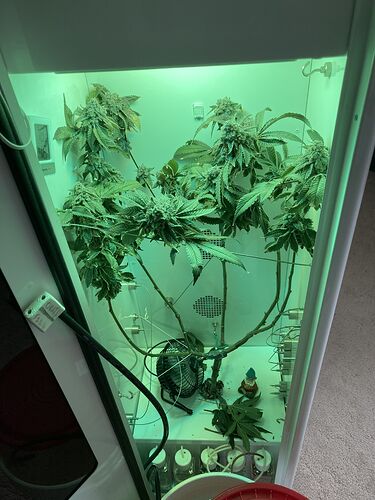 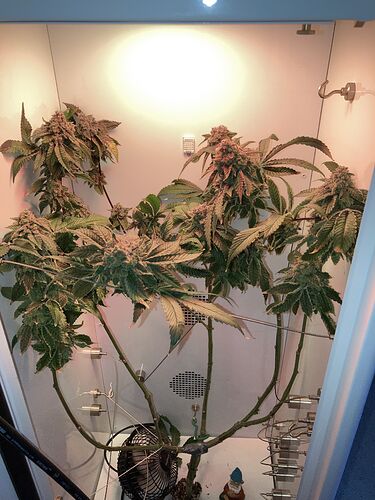 I was reading about trichomes going amber and for my surprise I discovered that is a sign of oxidation and that’s when the THC start turning into CBN.
It’s all the information I was reading it’s really true I would finish the plan right away.
And to be honest I know that everybody here say is that a little bit of Amber on the trichomes is a good thing, just in case check it out.

Let me see if I find the source and I’ll post it here.

CBD is what gives a true body stone, a true couch-lock stone. Since CBD has almost been totally bred out of modern strains smokers who like couch-lock have had to resort to giving up THC, throwing away THC, intentionally allowing the level of THC to drop as it oxidizes and become CBN so they can get a fake body stone from it, a false couch-lock stone from it. That is what amber trichomes actually mean. Amber is a sign of oxidized THC, THC that has been lost and transformed into a substance that is only mildly psychoactive.

Most couch-lock lovers refuse to accept and believe that fact, but nonetheless, it is a fact.

Cannabidiol is nonpsychoactive and was initially thought to have no effect on the psycho activity of THC. Recent evidence however show that smokers of cannabis are less likely to experience schizophrenia-like symptoms if there is a higher CBD to THC ratio. Experiments show that participants experienced less intense psychotic effects when intravenous THC was co-administered with CBD. It has been hypothesized that CBD acts as an allosteric antagonist at the CB1 receptor and thus alters the psychoactive effects of THC, resulting in a more easily manageable high.

CBD is generally considered to have more medicinal properties than THC. It appears to relieve convulsion, inflammation (and thereby also migraines), anxiety and nausea. That is why strains with a high concentration of CBD is suitable for medicinal use.

Although CBD has its own particular medicinal value it is not more important than THC when it comes to treating various afflictions. It is the interaction between the two that gives rise to the effect that sometimes alleviates the symptoms of various medical conditions.

CBD has a greater affinity for the CB2 receptor than for the CB1 receptor, meaning that its effect is mostly in the body and not so much in the head. CBD shares a precursor with THC and is the main cannabinoid in low-THC cannabis strains like hemp.

Tetrahydrocannabinol, also known as delta-9-tetrahydrocannabinol (Δ9-THC), is the primary psychoactive component found in the cannabis plant. It was first isolated by Raphael Mechoulam, Yechiel Gaoni, and Habib Edery from the Weizmann Institute of Science in Rehovot, Israel, in 1964.

This is the main compound that gives rise to the high that is tightly linked with the cannabis plant. It affects several areas of the brain simultaneously and can therefore give rise to an assortment of experiences, ranging from altered perception of time and the self, to feelings of euphoria and relaxation all through the body.

Medically, it appears to be analgetic, meaning that it is capable of alleviating even severe pain. It is also known to be neuroprotective, which rules out the possibility of brain damage, which was initially proposed to follow from heavy use of the plant. It has approximately equal affinity for the CB1 and CB2 receptors. By binding to CB1 receptors (the ones in brain) it produces the high that we are so familiar with. That is why the effects of THC is more cerebral, than the effect of CBD, which seems to have a greater affinity for the CB2 receptor.

Cannabinol is the primary degradation product of THC and increases in concentration with plant age. The concentration of this product in the bud is heavily dependent on the time of harvest. Harvesting the bud at a late stage also means that the concentration of CBN in relation to THC will be higher when compared to the peak of THC production.

CBN content increases as THC degrades. It is only mildly psychoactive and can cause “fuzzy head”, drowsiness, disorientation and sleepiness in the smoker, properties that can be considered unpleasant in nature compared to the clear high of the THC. Its affinity to the CB2 receptors is higher than for the CB1 receptor, meaning that it mostly affects the body. 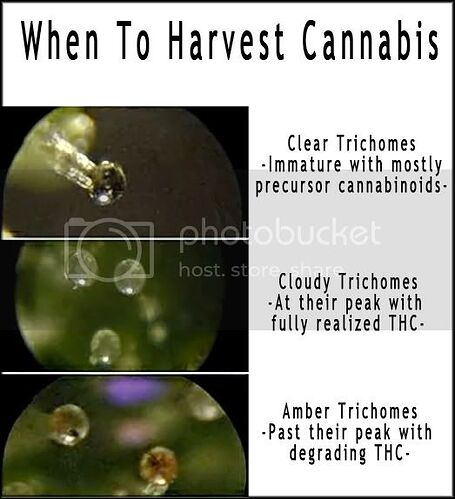 I see that. I’m looking forward to a more couch lock smoke and that’s what I’m hoping for with this. Maybe it’ll be less psychoactive but I can’t pass up something that might be super medicinal. Plus I wanted to push her to her limits. I think they’ve been met! Today is the last day under lights. Tomorrow and Wednesday will be darkness and then pull her on Thursday

Then I guess that’s just what I like then

It really is great info! Definitely saving that comment.

I am pickin what yer puttin down my guy

I enjoy watching ur skills as well

Tomorrow Morning will be the time of harvest! 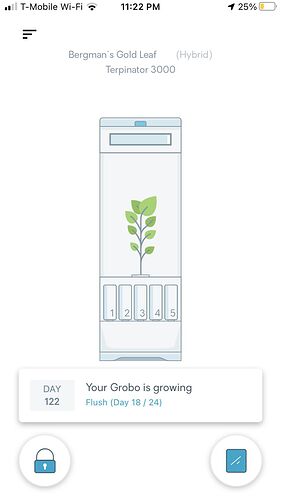 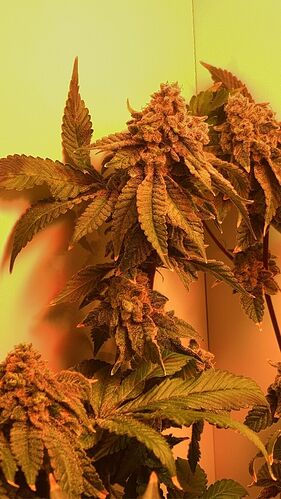 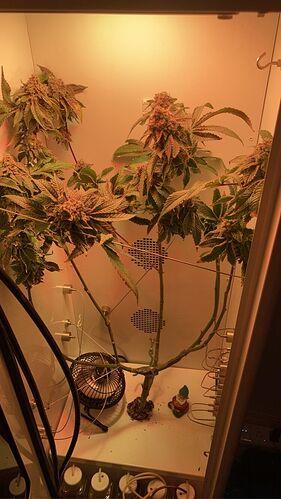 Going to be extremely fun

You can say that again! This thing is gorgeous.
Coming down right after I wake up 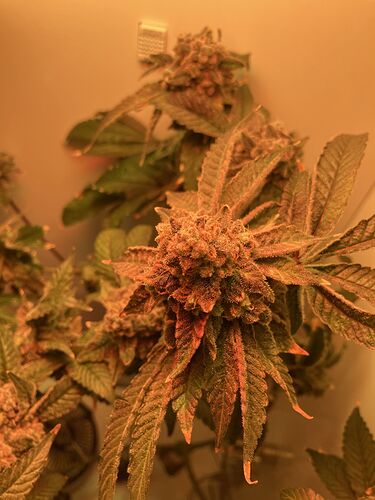 @Choppo0816 @Rich @Fluffhead @Wake @Todd.grobo @SilverGrobo Check her out! All hung up. Hoping for at least an ounce upon the dry. Thank you all for your dedication and assistance along the way. So glad to have made it this far and have had such a great turnout. These buds are so swollen! 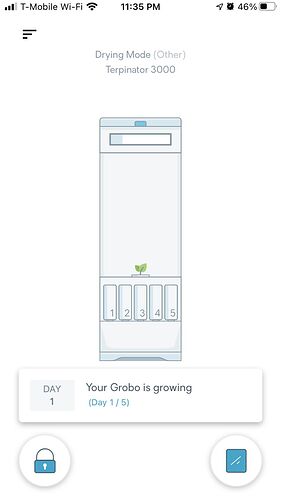 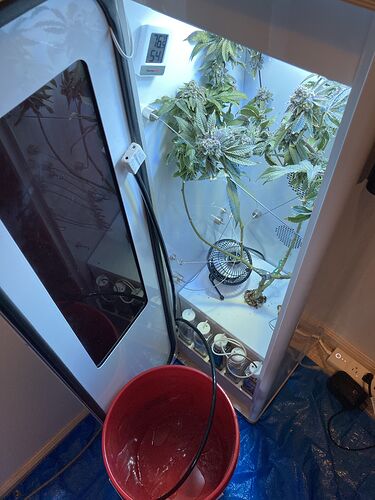 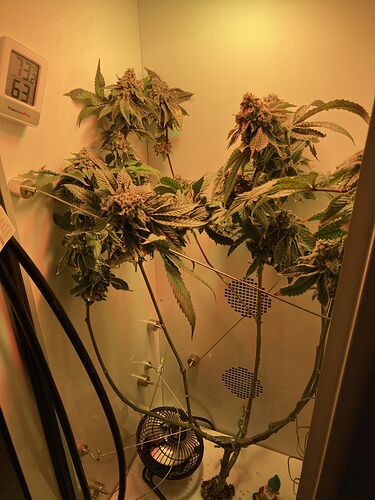 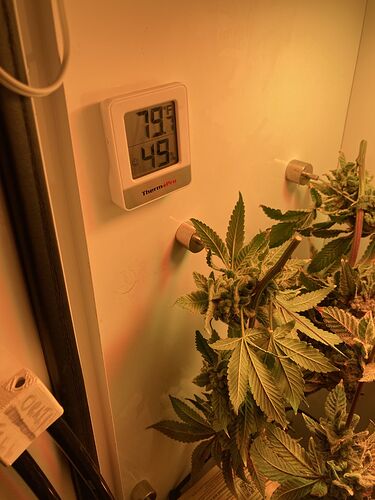 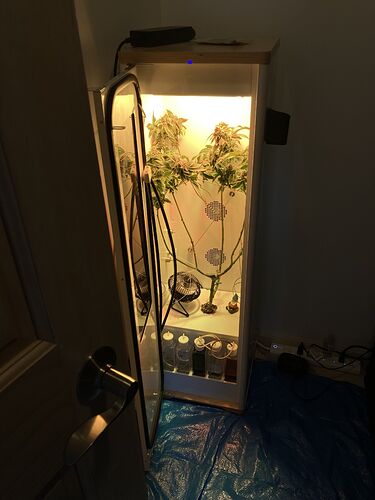 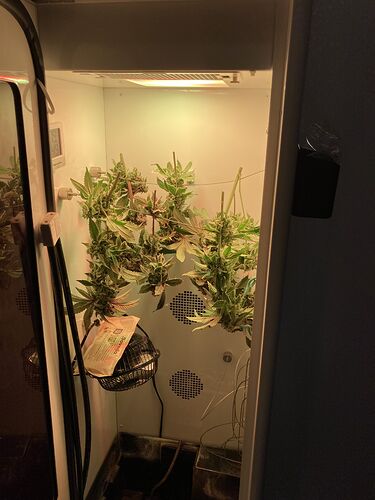 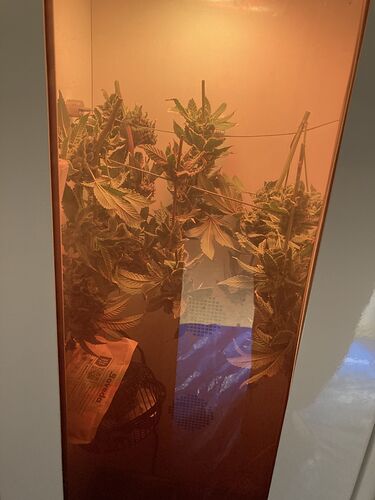 Sorry I wanted the pictures to upload in order but they did not and I’m too tired to fix it lol. Can’t wait to see how she does! Grobo says 5 days drying, but I’m hoping she makes it 6-7 at least.

Thanks Todd! Same here. And I’m planting seeds! Just got my 3x3 set up with a Grower’s Choice ROI E - 420 and some fans and a humidifier. Running 2 Sister Cookies and 1 Fluffhead Og courtesy of @Fluffhead 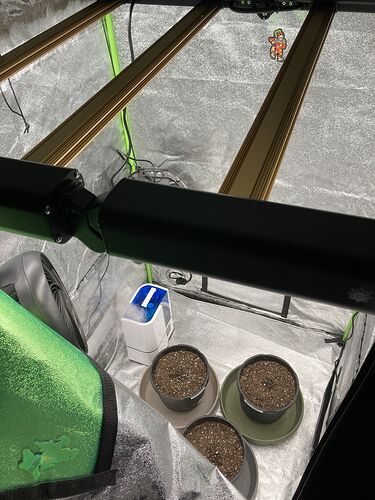