You can bring that light down to the canopy as close as you can without your hand getting hot or uncomfortable(stick your hand above the canopy and bring the light down to you hand until it’s a bit warm, then bring it up an inch or two) she can handle it. Also use your cal/mag at half strength of what the bottle says

I was actually thinking to do exactly that, but was reluctant due to the fact that the light might not cover the whole plant properly then, but I guess if the manufacturer says this light has a 120 degree beam angle, then It should be all good as you say

As you can tell these two 50W lights are proper slim and I can comfortably keep my hand underneath, guess it’s rather hard to burn the leafs with such a low wattage

I’ll do as you say and will keep you posted

As promised - I’ve applied around 600ml of PH’d water & Cal/Mag at half the recommended dose + I’ve lowered the light by a couple of inches, now around 7” from the canopy, putting my hand under the lights can barely make me feel any heat, slightly warm at best - but it seems to be as low as I can get it without losing the overall coverage, which is needed due to how flat and spread out she is, I’ll let her grow a couple of inches into the light before adjusting since I’d rather experiment with how low I can get these lights in small increments. That would be it for now 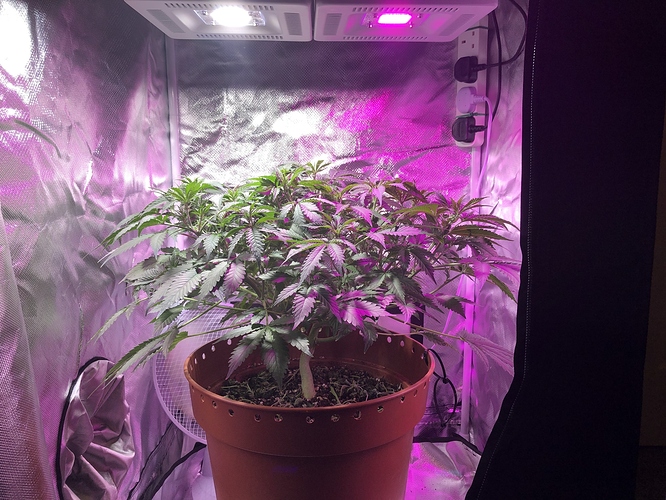 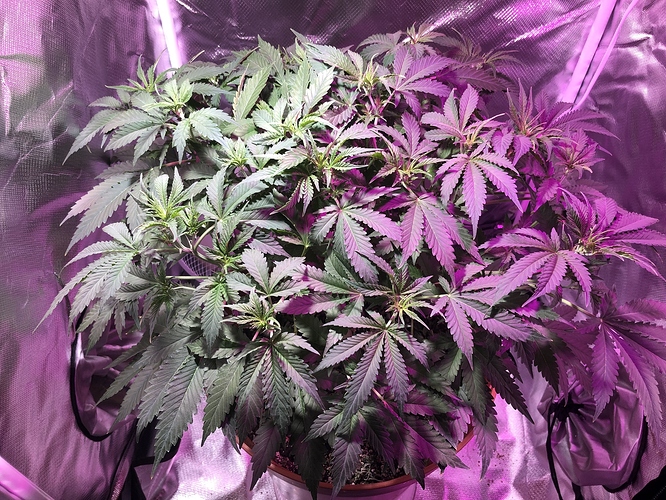 Just a quick one - looks like she loved it - immediately picked up, hugging the lights again and turning me into a full-time Leaf Tucker

in a couple of days she will fully cover my 2x2 tent, which seems bonkers to me, her fan leafs are already touching each and every side of the tent 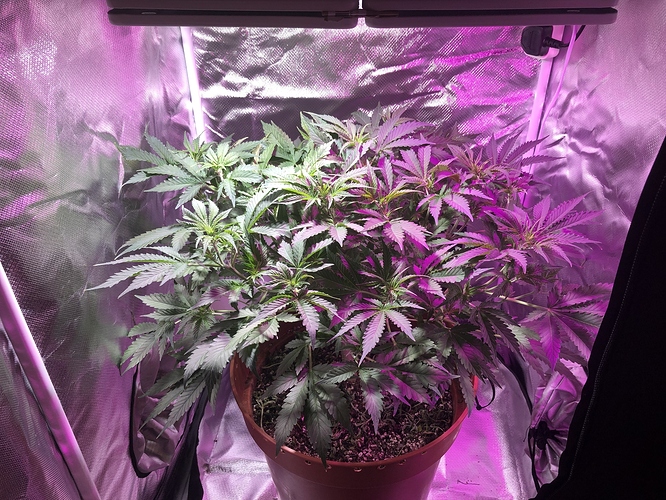 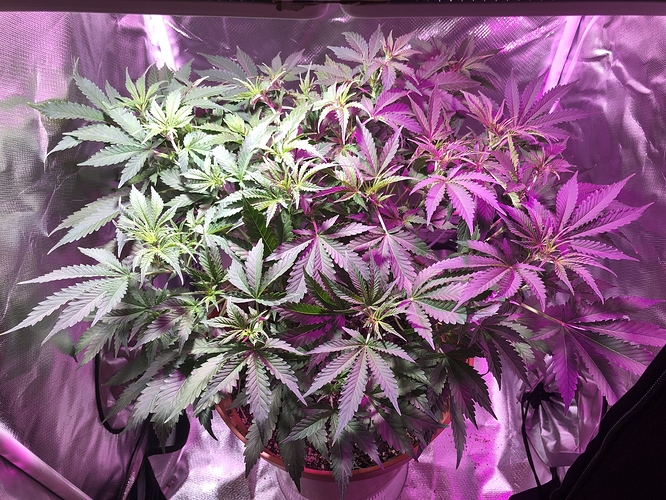 Don’t you guys think her defoliation should be coming up soon? Or should I leave her to her own devices? I was planning to do the latter but keeping in mind how exponential her growth is - I’m about to go back on my thought 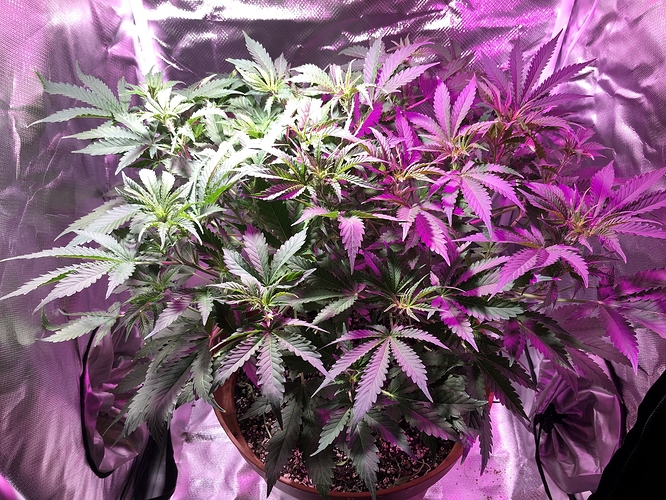 Just keep tucking leaves if your gut isn’t telling you to remove leaves. If she’s super dense then it couldn’t hurt to remove the inner most leaves to let better airflow through maybe? Just a thought anyway

Let us compromise then - for now, I’ll take her out and I’ll spread her canopy out even further since some colas are already climbing faster than others, which will open her up even further - without removing any leaves to allow quick and easy recovery from doing that - then once she dense up again I’ll keep on tucking - rinse and repeat until I’ll completely run out of horizontal space - since I fully agree with trying to stress her as little as possible, given what I’ve put her through in her initial growth stages - for some reason I simply feel like I owe it to her, even at the cost of lower yield

Unfortunately, this really IS the limit of how horizontal I can get her canopy to be - in around 10hr I’ll be back with a picture of a much happier plant than what you’re about to see - I’ve tied down each and every cola to my liking, completely exposing her center for future real estate opportunities

Shes flat as a desk - now the only way is UP 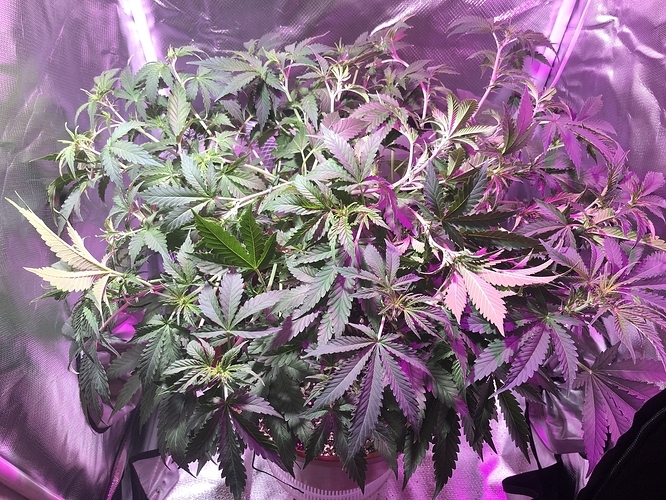 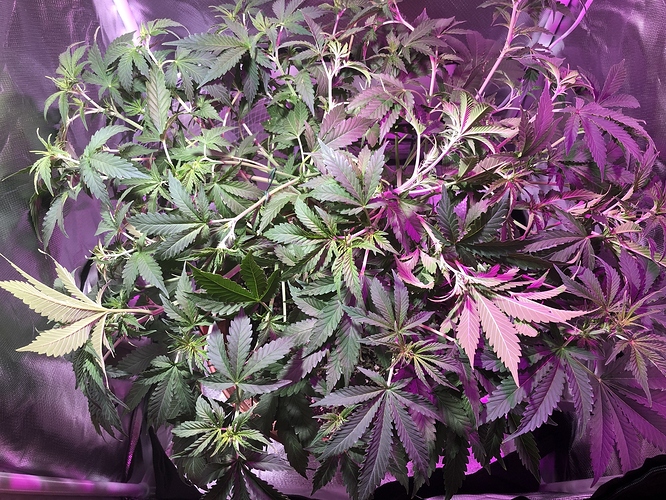 5hrs later - and this is what I see

! I’ll take care of her undergrowth and will slightly lollipop her at a later stage, in a week or two given that I’ve managed to keep her vertical growth tamed pretty good - as before, I want her to bush up as much as she wants. I’ll do my best to refrain from posting like crazy, I promise 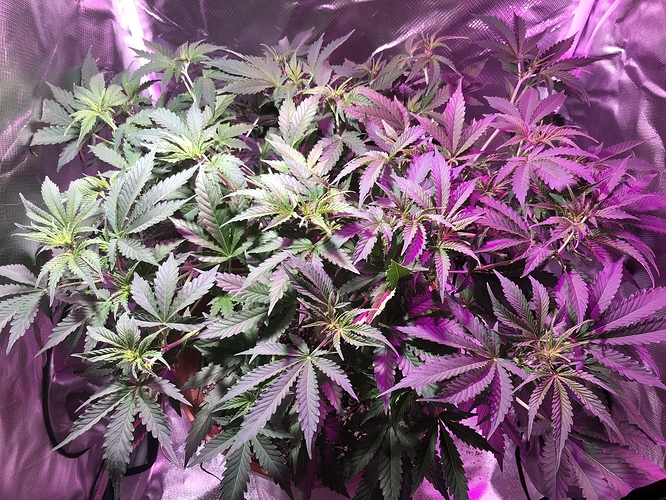 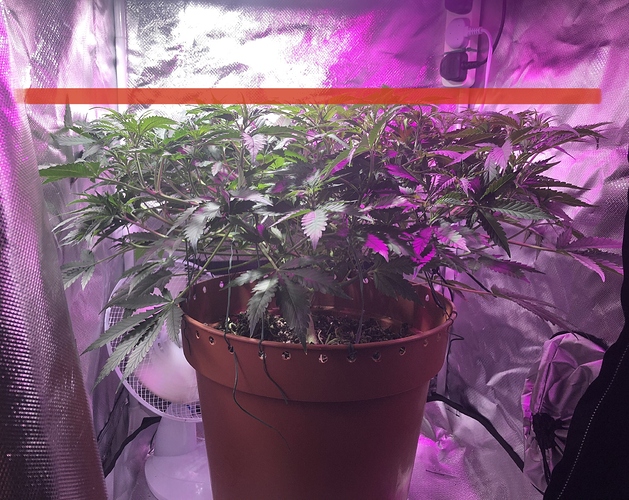 Day 47 - nothing worrying to report, fed 700ml Water + Tomorite / 6.5 PH. I’ve come to the conclusion that she loves LST - responding really well to it, but she HATES defoliating - each time I removed even a few leaves she stunts for a day or so - hence I’m not planning to do that again, her canopy is flat enough to allow good light penetration and I believe she will need as much ”solar panel” surface as she can get with this ridiculous amount of colas & a rather weak light source - I’ll reconsider it in her late, late flowering period or right before starting to flush

Correct me if I’m wrong - first grow and all 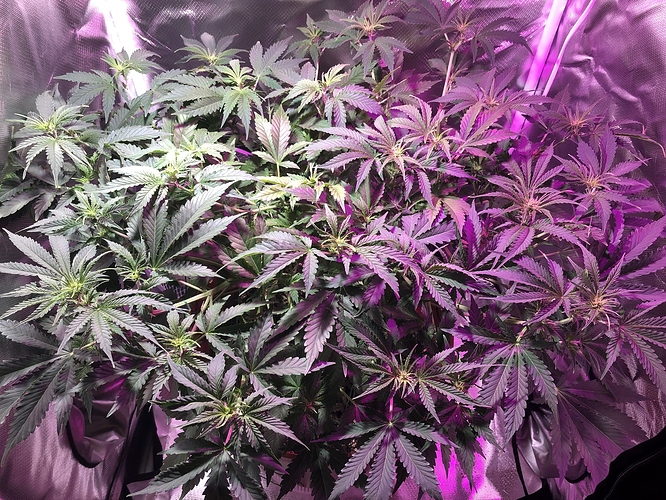 I’m taking most of my big fan leaves off roughly 3 weeks into flower. But I’ve had to remove the odd one here and there just cause I’m in the Grobo. If you have a lot of room just keep tucking I’d say

Normal for an auto I believe. 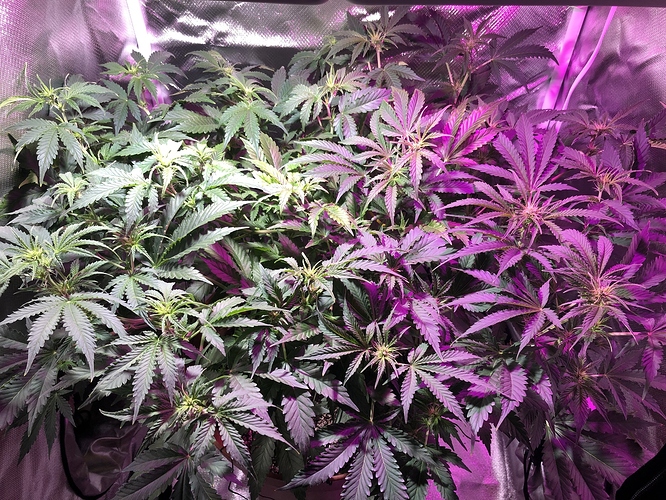 Day 52 - still not a single issue, Cal/Mag seems to be working great by the looks of the new leaves, much less ”drawstring” effect all around, except for some older ones. 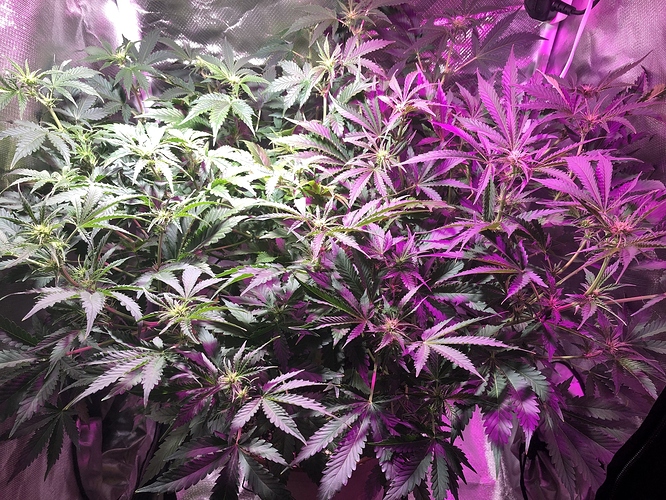 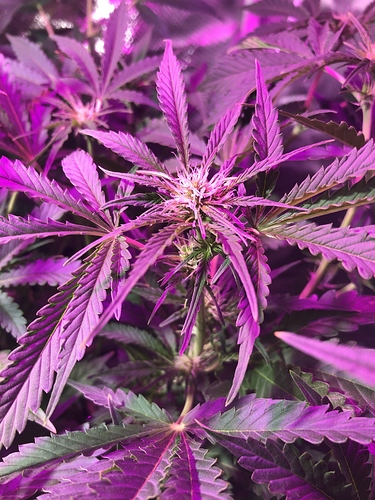 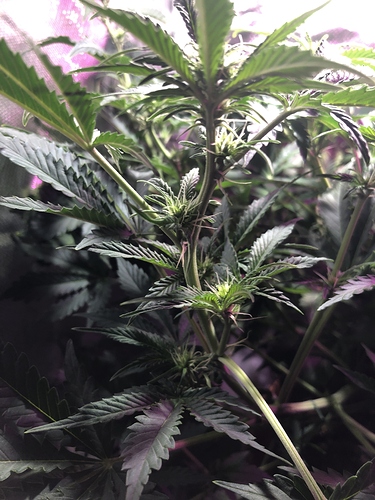 Day 54 - still going up, the buds are starting to properly develop and she drinks like crazy - no signs of deficiencies, making me proud she is

Open the photos in a separate tab and enlarge it, the resolution on the buds is insane

If I caught the focus properly, will I be able to see the trichomes at this level of magnification? 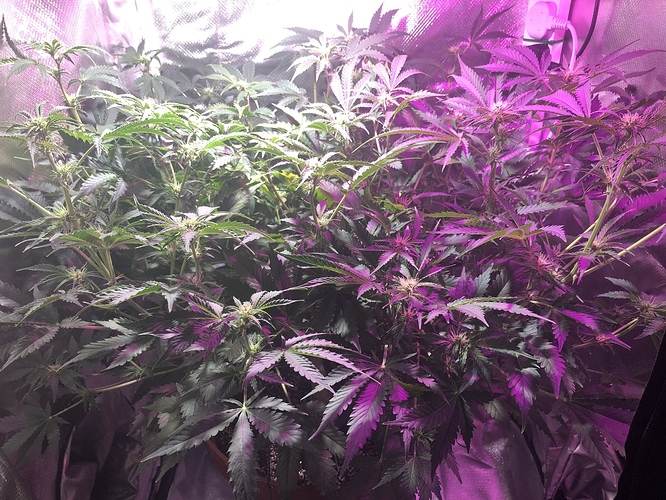 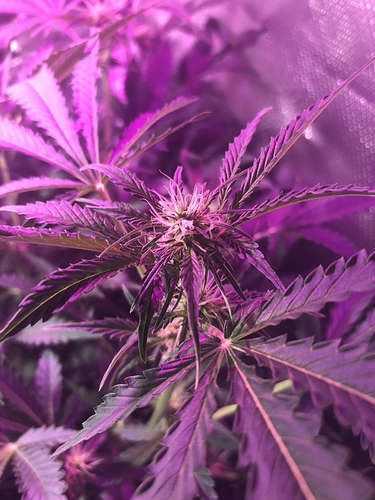 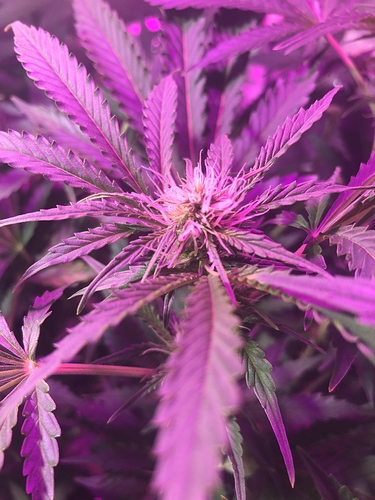 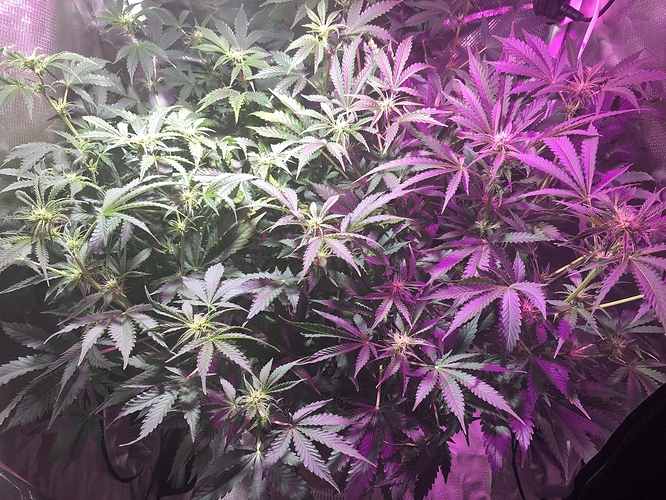 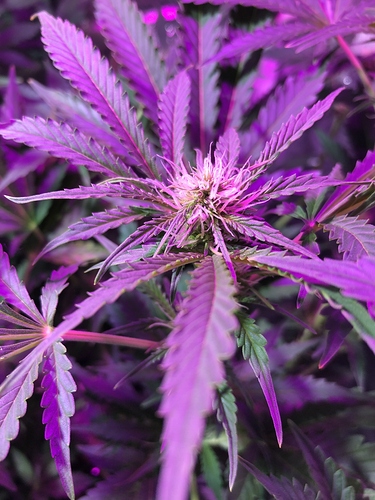 Right, so - we’re at day 55, I’ve noticed yet another issue - initially, I thought its some random leaf mutation, or maybe a PH problem - but then I’ve noticed a couple more leaves with the same issue right under the light, which along with a specific upward clawing of the edges made me realize that these symptoms must be signalling early stages of a light burn

Just joking mate, I’m just as surprised that 2x50W lights can do ANY damage at all

So, given that I had to readjust the lights I’ve found out that my blower had seriously dried out/killed some of my bottom fan leaves, on top of that she stretched A LOT these past few days making her canopy very uneven (yet again). All of this made me realise - you need to lollipop her, Gio, you can’t just let her bush out like that - do it now you softie

That inner voice made me take her out yet again, remove all of her strings, cut out a hefty amount of undergrowth (not as much as people suggest, as I want to do this incrementally) and reapply LST - this time I’ve had to use actual cable ties due to how stiff the branches got (I swear they didn’t even hurt the main stem, which I’ve bent crazy using them since sprout - so I’m positive that a much lower pressure generated by the upper growth can’t invoke any damage either) - not a single branch got snapped in the process

So, here’s how she looks now - remember, she’ll need a day or so to perk up once again, but still looks way better than I imagined she would after such mistreatment (that is, for a living thing that lost 20% of its limbs in a couple of minutes

I’ll monitor the situation, the lights are now back to the manufacturers recommended height - If I’ll see her stretching too much, I’ll slowly, SLOWLY lower them once again - it’s unfair that I’ve joked earlier quoting @Osage since it was me who took it too far too fast 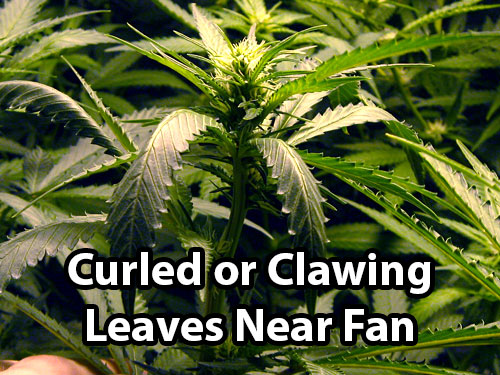 Exposure to too much breeze from the fan can affect the cannabis leaves to start to curl and "claw." Learn about wind burn and how to prevent it.

I could be wrong on this, but it looks more like wind burn than light burn, however there weren’t really enough pics to really see. Either way you’ll know soon enough

You could have @Stephen weigh in on this. Close call either way