Any data on what the ppfd and par readings are on the grobo led?

So I’m starting a new build for a new grow area of mine and I was comparing my fluence spyder x and spydr x plus to other lights like the hlg 550 r spec, bios Icarus, migro 600, and the growmau5 chilled cobs and was comparing ppfd ,par levels and efficacy. As you can see im a big fan of the full spectrum white light way easier to diagnose plants and way easier on human eyes… anyway all of these companies are great and are really producing cutting edge lights.

I got to thinking what about the grobo … obviously won’t be the same numbers as those lights previously mentioned but it would be an interesting fact to know?

@Stephen @Chris any data on ppfd, par, and efficacy for the grobo ? What Is PAR, PPF, PPFD, DLI, and Efficacy? Light Factors for Your Indoor...

PAR Photosynthetically Active Radiation, or PAR, is the band of wavelengths between 400nm and 700nm. Plants use this range of electromagnetic radiation to perform photosynthesis, but most efficiently absorb wavelengths in the mid-400s (blue) and...

Hi Anz, Great question; thought it would be appropriate to get a response to this question from the person who designed the light solution in the Grobo One

the low-down is that there’s a lot to it so I’ll try and keep this as short and sweet as possible. Typically, in the world of LED growing today you’ll see a lot of companies producing or using blue/red spectrum LEDs, that cater towards the 440nm and 660nm wavelengths on the visible light spectrum. These wavelengths are neces…

Thank @SilverGrobo I understand what each measurement is … I’m
More concerned with the what the grobo numbers are putting out ? I think that should be basic data shown when your buying the grobo? I mean I would like to know how efficient and strong the light is ? I’m sure plenty others would too

Smh at the non response

I’m kinda ~~~~ surprised they haven’t even acknowledged the inquiry. Makes one wonder why. It is a valid question. First thing I look for when buying a light

Those meters are fkn expensive. The “cheapest” and somewhat reliable one I could find was not cheap at all. Seems a good one will really cost anywhere from $250-&1000, but I did scope this one out: 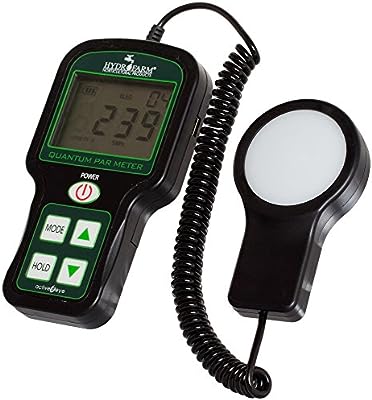 So here is my initial response to this question.

I’ve given this thread’s input to both the marketing team and the hardware team and we all agree it isn’t really a focus for us right now. You may see an article or blog or (Oh gosh, not again) a video of me talking about our PPFD ranges in the future, so stay tuned.

Great question @chris_barfield, I’m not discounting it at all. Very valid input. Thanks for the question.

What’s not a focus the results? the efficacy? Why is that not a focus? Why wouldn’t it be something you want your customers to know? That seems a bit odd that these numbers would remain hidden from customer spending 2000 dollars a unit? I understand there’s many factors that go into those test but the grobo is but so big and light is at a fixed height I’m sure the numbers aren’t going to vary dramatically? Why would marketing be contacted ? Would the results hurt the image of grobo? Just not understanding why so much information is hidden from us? Just about all the high end companies in the game post this information all over there websites and literature… seems weird and the response seems like the grobo team is deflecting …

Android and iPhone devices have a light sensor embedded for modifying screen brightness and to do things like help the camera in making some calculations and decisions. I can’t speak much for newer iPhones as I haven’t tested one but Android is definitely improving.

In the past these were very basic sensors with wild jumps between low/med/high light but the quality of these has been improving over the years. Most of the models from 5 years ago weren’t great, but as of late they’ve been getting better.

If you’ve got a Samsung S9 or Pixel 3 or similar newer phone you might have some luck just using the smartphone app (like “Light Meter”,) though understanding the limitations of the sensor is a big part of getting a reading that’s close to reality. Professional equipment will let you take readings from wherever you want to whereas smart phone sensors will generally only give you an accurate reading when it is in certain positions (or in other words, from certain distances from the light and angled “just right”). Once they are outside of the “sweet spot” the readings have a higher error rate; though again this has been improving over the years.

The trick with those apps is to figure out at what distances your phone gives an accurate (enough) reading (i.e. 1ft away, 3ft away, etc) and for which lamp types that distance is (i.e. CFL, MH, LED, the sun, etc) and how to position the phone to get a consistent result from test to test.

Some apps have a calibration feature to help with this but it does take some practice to learn the quirks – initial tests will probably be way off until those sweet spots become better known and understood through some trial and error.

I’d think it’s worth some experimentation at least (for the fun of it) if you’re interested in trying to measure this without purchasing the meter! Can try to test some reference lamps with known LUX values (or published ratings) then see how that compares to readings taken elsewhere.

But I do agree, the lack of a tech spec sheet is annoying.

@chris_barfield better late than never I guess? Never saw this post and not sure why I didn’t get a notif for it

I would consider light my area of expertise considering that I’ve written some technical docs/articles on the matter of horticulture lighting. That aside, Grobo does perform on par (no pun intended) or better than most grow lights available today. I can’t share the specific data of our comparisons at this time so you’ll just have to take my word on that. It really just comes down to the intended area you’re attempting to light.

Just to set a baseline never use a lux meter to judge grow lights. Never judge a light by the wattage. I can go into details about why, but this is someone with a lot of knowledge in the field telling you not to do this. Ask away if you’re interested and I can make another post explaining why

Our lights are ~150W and output enough PPFD for plants contained within the 1’x1’ box. Remember that PPFD is relative to the size of area you’re lighting and takes into account things like light reflectivity off of walls. Our inner white walls are more effective than tents, for example, at reflecting light back onto the plant.

@chris_barfield to answer your question you want 400~800 PPFD seen at the top of your plant for the seedling stage, 800~1000 PPFD for veg, and about 1000 PPFD for flower. This is a rule of thumb and quality of light affects these values. PPFD is a flat range from 400nm~700nm. This means you could theoretically have a blue light giving you 1000 PPFD, but that wouldn’t be good for your plant at all

interesting that @Chris just saw this and posted and I just came across this new video released 2 days ago on the same topic! pretty cool!

Whats your thoughts on the video?

Excellent video. The vast majority of what he’s saying/researching is accurate to what we, as in everyone in the world, knows right now in terms of light and its affect on plants (specifically cannabis in this video)

There is research going on for some things that he glazed over in the video, like the use of green (or ‘white’) lighting in plants for horticulture functions (he mentions cosmetic specifically). That and he doesn’t go too deep into blue/red ratios that are optimal for growth in plants at different stages of their lives. Consider ‘Optimal’ to be a word that should be used very loosely in terms of growing plants - you’ll never get optimal, but you can get close to it

@chris_barfield I have been away for a year from the forum. I have a par meter. Ill do some testing at different stages of the cycle to see how it compares to something like the HLG 550 V2. YOu have the RSPec right? Nice. How do you like it?